NYC turns its back on progressives

If the Werkes has its way, the word “progressive” will become as pejorative as “liberal,” or (let’s go for it!) “thug.” Because progressivism is a leading cause of death — especially fatal to minorities.

New York City is turning its back on the progressivism of its deeply unpopular mayor, Bill de Blasio — just as the city’s police actually, physically, turned their back on the disastrous Prog.

The city’s partisan primary concluded there on Tuesday 06-22-21 under the novel ranked-choice method. Because of no-excuse mail-in voting (more progressivism), results won’t be known for a week.

But first-choice results of in-person voting show former police captain Eric Adams leading with 31.7% of the vote in the Democrat(ic) party’s primary. How moderate is Adams? He registered as a Republican until 2002. Adams is well ahead of the progressive Maya Wiley at 22.3%. How progressive? Endorsed by A.O.C. progressive.

Add the other two most progressive candidates — Scott Stringer at 5.0% and Diane Morales at 2.8% — and you get only 26.1% of the vote. Running third is moderate Kathryn Garcia at 19.5%. Three of the top four vote winners ran against crime as their big issue. (Andrew Yang got 11.7%.)

You know it’s over for progressives when even Thomas Friedman of the New York Times gets it! He writes today, “homicide rates in large cities — many of them run by Democrats — were up more than 30% on average last year, and up another 24% for the beginning of this year.” In New York itself,  homicides up 53% over the last two years and shootings more than doubling. Friedman:

Big swaths of my old hometown, Minneapolis, have been turned into a dangerous and dystopian ghost city, wracked by gun violence, since the police murder of George Floyd. … The defund battle cry initially guided the super-progressive Minneapolis City Council, and it has diminished and demoralized the police force, leaving behind a department that is often either unable or unwilling to risk getting embroiled in any kind of confrontation.

As The Star Tribune of Minnesota reported last week, “the number of people shot citywide went up nearly 90% compared with the first half of last year. … Department officials say it is no coincidence that the rise in crime comes after the departure of at least 200 members of the city’s police force … Only 19 people were in a new class of cadets that just hit the streets.”

Black residents make up about 20% of Minneapolis but well over 60% of the shooting victims. Alas, you’d never know that from the public discussion … because these shootings mostly don’t involve white cops. 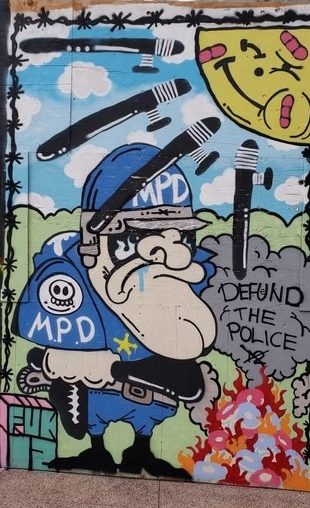 When Dane County Democrats (and The Capital Times) endorse for Madison alder a white, Marxist cop-hater like Rebecca Kemble over a blue-collar dad like Charles Myadze, a black man, you know the party has gone hard-left progressive. Madison progressives — with the enthusiastic backing of John Nichols’ Capital Times — cut the police force by four officers and turned down a federal grant that would have funded another ten officers. Murderous Milwaukee cut 120 cops! (See its crime ranking in sidebar.)

“Madison is seeing a pretty major crime wave that is not being addressed in any way that’s meaningful,” Speaker Robin Vos observed.

The Assembly Tuesday passed the bill 61-37. (More here.) The only Democrat voting in favor was Nick Milroy from rural Superior. (Wisconsin’s Joe Manchin?) Our one-term Democrat(ic) governor is expected to veto.

Blaska’s Bottom Line: Which may explain why Joe Biden is trying to get out in front of the crime issue with a Big Plan today. Expect progressives to throw a hissy fit if it has any teeth. A big if.

Will Madison be the last place that ‘gets it’?