Who ya gonna call? Social justice warrior or a plumber?

Who is doing more to help young Marquon achieve the American dream of two cars in the garage (his own cars in his own garage, that is) and keep his jive ass out my garage?

Madison public schools are teaching apartheid, plain and simple. It’s called Critical Race Theory — the marxist dogma that police are slave catchers, the American Revolution was fought to preserve the slave trade, that people with white skin are inherently racist and thus evil. Bad enough, but worse is the over-arching lesson that people with darker skin cannot succeed without the tender ministrations of Big Gummint. That they require the intervention of Woken white people. CRT teaches guilt, not opportunity; dependence, not independence. 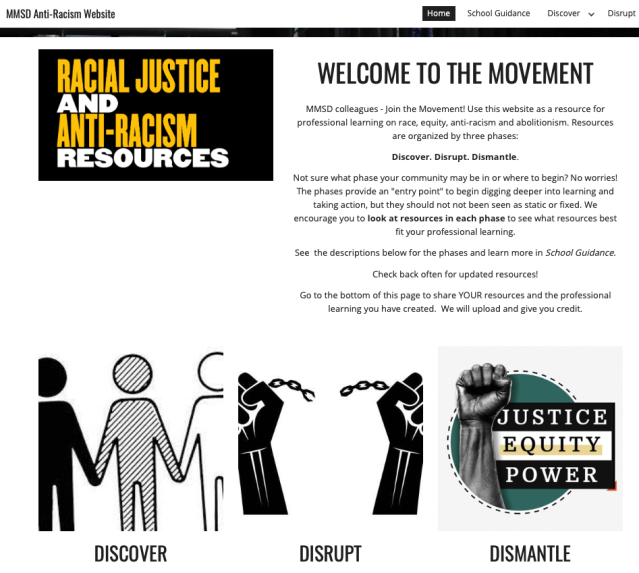 Madison school district welcomes YOU to the movement to ‘Discover, Disrupt, and Dismantle.’ https://sites.google.com/madison.k12.wi.us/mmsd-anti-racism/home

No wonder this city’s educrats are shrieking at Republican efforts to ban CRT — “this idea of race underlying every aspect of our lives,” as Republican state Sen. Andre Jacque is quoted here.

Madison schools “are working to make students of color feel more welcome through culturally responsive practices, including revamping much of the district’s curriculum and teacher training.” So says school board president Ali Muldrow.

Deplorably, Blaska would ask his old adversary what, exactly, that revamping looks like? What is culturally responsive about mathematics (for one instance) — the universal language?

→ “Some may claim that imposing racial distinctions, like affinity groups, is somehow necessary to address ‘systemic racism.’ Discrimination to cure discrimination is antithetical to the principle of equality under the law.” — WI Institute of Law & Liberty.

The WI State Journal reports that Muldrow worries “the [Republican] bills could open a floodgate of scrutiny around conversations about race and U.S. history.” Yes, scrutiny is the last thing they want. Progressives rule by expert and that ain’t us, fellow taxpayers. MMSD has already dumbed down honors classes, abolished the failing grade, and is paying social justice warriors to set up black-only student clubs.

Our schools of education, from Madison to Superior, are hornet nests of Woke progressivism. The WI State Journal quotes Ed prof Gloria Ladson-Billings arguing that CRT does not teach one race is superior to another but that white privilege perpetuates inequities.

Huh? That is a distinction without a difference. You did your homework, delayed baby-making until you had a steady income, obeyed the law, showed up at work sober and on time because … you are privileged? What a destructive message! What a crock of … CRT!

Learn a trade not a tirade

Pleasant Rowland donated $5 million to the Boys & Girls Club of Dane County to create a training center for electricians, carpenters, plumbers, HVAC and other skilled trade workers! (Hooray for the accumulation of vast wealth! Down with state socialism!) (More here.)

How many more years
do YOU give the Madison school district?