‘Do progressives have an answer?’

No, because progressives are the problem.

If she looked a tad less chirpy than a car hop on Happy Days, Rebecca Kleefisch might get more respect. Because she is pretty … ballsy (if you will pardon the rampant sexism). The former lieutenant governor is calling on the Republican state legislature to ban critical race theory in our public schools (including the University of Wisconsin) and state government. Idaho, Arkansas, Oklahoma, Tennessee, Texas, and Arizona have already done so. (More here.) 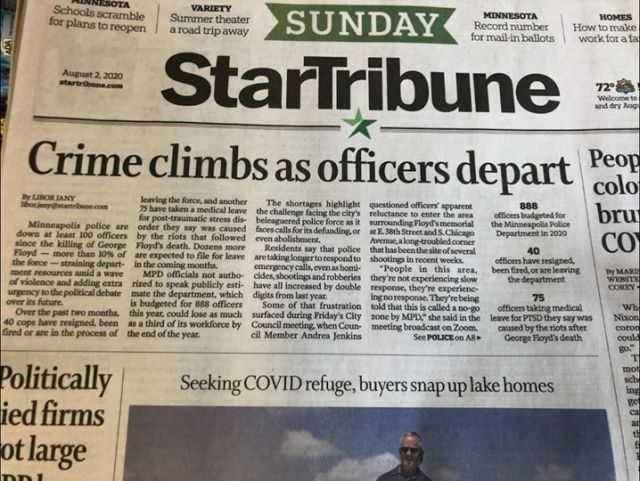 America is fed up

Marxist in philosophy, critical race theory (equity, social justice, BLM, etc.) teaches hate and promotes division. Which is why a Marist poll finds 42% of Americans believe race relations in the United States are getting worse, compared to just 17% who believe them to be better.

The death of George Floyd 12 months ago was a godsend to the equity/critical race theory people — that one irrefutable example of bad policing amidst a farrago of “Hands Up, Don’t Shoot” hoaxes. (Althea Bernstein, anyone?) Result, white people have actually become less supportive of Black Lives Matter than they were before, according to the New York Times.

Blaming white people for endemic racism dictates that black criminals must not be removed from the community lest the family structure be destroyed. The Werkes argues that crime is what destroys families. A new study, forthcoming in the American Economic Review, finds that jailing dad helps junior go straight.

Clearly, there is a small population of parents prone to other profoundly antisocial behavior whose presence in the household is harmful enough to outweigh the general benefits of intact families. In their case, incarceration may turn out to be a benefit, not a harm, to spouse and child.” — Parents and Prisons.

Critical to the 1619-Project racial theorists is hatred for cops. The Minneapolis city council infamously voted to abolish police. A year after George Floyd’s death, homicides have more than doubled.

Nineteen children in Minneapolis have been shot this year, an increase of 171% over the same period in 2020. Their relatives wonder where the protesters are. “Why ain’t nobody mad about a 10-year-old, my grandson, fighting for his life?” asked Sharrie Jennings, Ladavionne’s grandmother, at a May 17 mayoral event. “Because a cop didn’t shoot him, is that why?”

Minneapolis homicides between Jan. 1 and last week were up 108% compared with the same period in 2020; shootings were up 153%, and carjackings 222%. — Heather Mac Donald.

Nationally, homicides increased somewhere between 25% and 40% — the most in the 60 years of formal record keeping

“There’s a population on home monitoring that was never meant to be on it, including 92 or 93 who are charged with murder,” Sheriff Tom Dart laments. “I’ve been pleading with judges: “These are violent people who are a danger to the community.” — Chicago Tribune.

In the NY Times, Ezra Klein asks: “Violent crime is spiking. Do liberals have an answer?” [Spoiler alert: the answer is NO.]

Voters in New York City say crime and violence is the second most important problem facing the city, behind the coronavirus but ahead of affordable housing and racial injustice.

Blaska’s Bottom Line: Ya think? Meanwhile, our progressive Dane County Board of Supervisors is trying to build — in the fastest growing county in Wisconsin — a smaller jail! And judges like Everett Mitchell spin the revolving door.

When will Madison WI say ‘enough’?

15 Responses to ‘Equity’ is fatal;  the cure: more prisons!