“I hope you made it out safely,” one citizen e-mailed me after he fled McDaniel Auditorium as the chaos escalated into pushing and shoving. A Hillary Clinton Democrat, Larry intended to speak in favor of retaining cops in Madison’s public high schools. He never did get to speak, which was the idea. 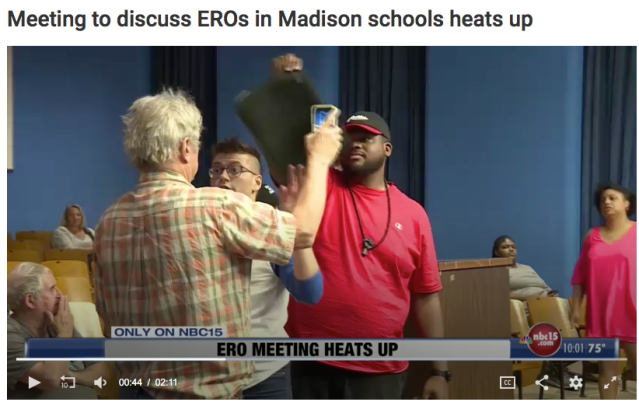 The same crew that disrupted the June meeting of the school board’s ad hoc committee on educational resource officers (EROs) escalated their well rehearsed disruptive tactics Wednesday. This time they surrounded those who disagreed with five or six bodies. They stood menacing close, subtly pushing and shoving, to prevent us from recording the chaos with our smart phones. First Blaska, then others.

“I didn’t really figure out what was happening for a bit when the big guy stood up in front of us,” Larry reported. “Eventually I moved since I couldn’t see.  I was concerned about the woman in the back that looked like they were getting physical. Hoping she did not get hurt. I took one picture and they started to block me. I just took one pic.”

A Madison mother attended this public meeting with her son, a recent Madison high school graduate. She is pictured on this morning’s front page of the Wisconsin State Journal.

They followed her son!

The mother reported to this roadside stand, just hours after the event:

I’m sure you witnessed what happened to me at the school board meeting today. I was assaulted by a woman there who tore my phone from my hand and threw it to the floor. Funny thing was, I was actually filming YOU so that you would have documentary evidence of the harassment that you received at the meeting! Just so you know, I did file a police report. My son was also followed from the meeting to his ultimate frisbee game afterward by one of those creeps. The police have been informed of that, too, and my son got the guy’s license plate number.

I wonder if I will ever be able to attend another school board meeting! Wow. Unbelievable. If the rest of Madison only knew.

This mother of a MMSD student wonders if she can ever attend another school board meeting. Which is the idea! This is how the social justice warriors discourage citizen participation.

The next time cops in schools is discussed, Blaska will insist on a significant police presence.

Unable to mount a credible case, they employ intimidation. The woman from the Derail the Jail coalition who followed me to the podium unintentionally summarized the idiocy of their cause:

“No matter how or whatever stipulations you put on a police officer going into a school they are going to do what they want to do, what they are trained to do, which is kill black kids.”

When all 4 EROs this past school year were minorities? !!! The EROs must be poorly trained for they have yet to kill a single black kid.

The irony is that those supposedly murderous EROs are defending children of color. They are involved, unfortunately, in the majority of the brawls in the schools. At the previous ad hoc committee meeting, I made the point that boys form the majority of suspensions and arrests. That does not mean that boys are being profiled or discriminated against; it just means boys cause more trouble. (Although girl fights seem to be increasing!)

I am irritated that the Wisconsin State Journal fell for the hooligans’ ruse about “recording juvenile speakers.” A nice piece of Saul Alinsky agitprop.

The “juvenile” in question was no younger than 17. In any event, the anti-cop agitators trotted her out to a public meeting in front of TV cameras and newspaper photographers. They kept blocking my attempts to record the proceedings well afterwards regardless of the age of the speakers, all of whom were well over 21. And too many petty acts of harassment to list here but one of them was trying to prevent me from taking a seat by throwing their legs over the chair.

A special thank you NBC TV-15 reporter Piper Shaw made the point at the end of her report that citizens have a first amendment right to record a public meeting — as, indeed, her cameras did. (Her segment showed children.) I do give credit to ad hoc committee chairman Dean Loumos for advising the audience of the same. Not that his warning made the slightest difference. It was a right that was consistently violated.

It is clear that Wednesday was another in an organized effort to restrain speech — “viewpoint discrimination” in the words of my attorney, Rick Esenberg.

An outfit called Freedom Inc. is the organizing and training agency for these disruptions. Its adherents are drawn from the same anti-cop coalition that formed Derail the Jail gang that shouted down the Dane County Board last fall to the point where that elective body (on which I once served) had to reconvene the next day to finish business.

This is the same claque that put Mike Koval before the PFC on the spurious charge that he called a raging lunatic “a raging lunatic.” One of whom was Shadyra Kilfoy-Flores, who spoke Wednesday. (I was prevented from recording her, as well.) These guys disrupted the Madison Common Council  when it was considering adding 8 more police.

Progressive succor for the speech nazis

It saddens me that my old editor Dave Zweifel of The Capital Times encourages this kind of harassment. Two days after Independence Day, Mr. Zweifel went up with a column that approved of harassing people of opposing viewpoints. “Change-makers know civility isn’t all it’s cracked up to be.”

Of course, in its account, The Capital Times calls Blaska a “rightwing gadfly” while the agitators are simply “activists”? I know, how about “change makers”?!

Blaska’s Bottom Line: The thuggery displayed Wednesday night makes what case? It makes the case that more police are needed, not fewer. If school board meetings are this chaotic, just think what’s going on in our schools!

How it looked from the inside:

Madison WI
View all posts by David Blaska →
This entry was posted in Cops in schools, Madison schools, War on Police and tagged Cops Out of Schools, Dave Zweifel, Dean Loumos, Derail the Jail, Freedom Inc.. Bookmark the permalink.