And, of course, sexist and racist

“Mainstream education is an oppressive institution,”
says one supporter

⇒ UPDATE: A recall petition has been started ⇐

That is because the Madison Board of Education is not considering evicting the school resource officer at any one of those schools for the 2020-21 school year, as its contract with the city permits. At least, that’s according to the agenda posted for Monday’s (08-26-19) school board meeting. And time is running out.

One supposes it is possible for a special meeting to be called before the September 15 deadline.

(The relevant language: MMSD may amend this Contract to reduce the number of SROs assigned to MMSD as outlined in Attachment A. Section I. from four (4) SROs to three (3) SROs. MMSD shall notify the CITY in writing before the removal is to occur. Specifically said notice shall be provided by September 15, 2019, to effectuate a reduction on June 15, 2020.)

Never in question was that the SROs would remain on the job for the 2019-20 school year that starts in another week. So maybe newly elected school board member Ali Muldrow is just playing to her base when she spouts her racist, anti-police trash talk. She posted this on her social media  page Saturday (08-24-19):

I think that it’s important to talk about what it is like for the students who are arrested at school and end up in the Dane county jail. We would not talk about the role of the Nazis and act as if the experiences people had in concentration camps is a separate issue.

Police are the only people in our schools who can subject students to incarceration and the students they arrest and ticket in our schools are disproportionately LGBTQ students, youth of color, impoverished youth and students with disabilities. …

Cops can be great mentors and community members, sure, but they are the only people who have the power to arrest students and they target children with certain identities for the most severe punishments … 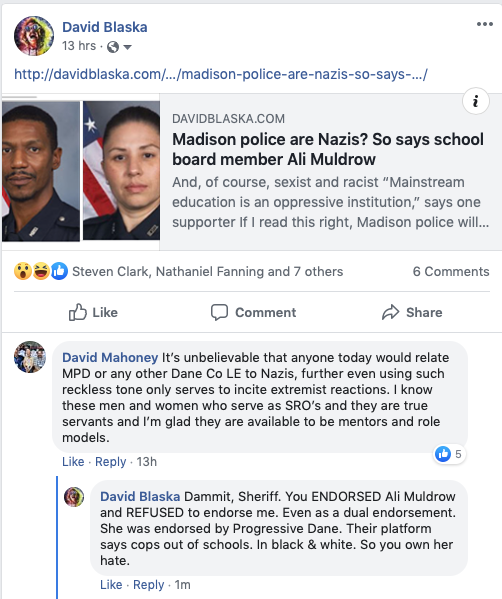 May we please teach responsibility?

One respondent, a woman named Wendy (we are redacting the last name) riposted:

If the police were not in the school and you caught a student assaulting, raping or committing some other crime against anther student or member of staff in your school what would you do? Furthermore, if you were the parent of the victim of these crimes, what would you want done?

This is a profound question, I would want the vast majority of resources dedicated to resolving this issue to be aimed at the healing and long-term recovery of my child. I would not be invested in the punishment of the other child …

What would you do if your child harmed somebody? Would you want them locked away in a cage, at what age, what crimes, what if they’re on the wrong side of an imaginary line …? Explain to me how arresting people makes the world a better place, how prisons and detention centers are keeping Americans safe?

Wendy answered with the “R” word:

I would want my child to be Responsible for their actions and accept the consequences. … I happen to be a victim of a hit and run by four teenagers in a stolen SUV running a red light and T-boning my Honda Civic. The SUV contained weapons, ski mask and items from a burglary. All four ran past my drivers side door while I was struggling to breath. The injury to my left arm will take minimum of a year to heal and there is no guarantee it will ever be 100% like it was before the crash. My car was totaled, I’ve had to start over on a new car loan. I’m paying off hospital and doctor bills. The two older boys in the vehicle have committed/been charged with further crimes since the crash. The driver hasn’t been arraigned yet for the charges stemming from the accident, because he’s in Lincoln Hills correction.

…  are you going to tell me these crimes don’t deserve punishment?

And this from Mike Maxwell:

If you truly believe that there is institutional racism in the public schools and that police actively seek out minorities, you have no business on any school board. I was a teacher in public schools for 34 years and find your claims absurd and dangerous.

How about listening to the teacher, for once?

This being Madison, Ms. Muldrow has plenty of support. (She did garner 70% of the vote against a certain conservative candidate.) Megan Diaz-Ricks, for one, fully endorses Muldrow’s police libel.

Students should be agents of their own learning trajectory and asking them to fit into a box and sit down, shut up, and learn is not what works. Maybe for you … but I like to think that children who reject the hypocrisy of mainstream education as an oppressive institution are highly intelligent and maybe we should be listening to them, not arresting them.

Blaska’s Bottom Line: What ARE they telling us, Ms. Megan? Liberals and Progressives have been running Madison schools for the last 40 years that Blaska has been on the scene.

27 Responses to Madison police are Nazis? So says school board member Ali Muldrow