for some write-in candidates, for others it’s: c’mon down!

It’s their party and The Capital Times can freeze out Blaska from its school board candidate debate next Tuesday 03-15-22 if it wants. But what a difference three years can make! Editor Paul Fanlund excuses his news blackout this-a-way:

“Our rationale for excluding Mr. Blaska is that his name is not on the ballot. If it were, we would include him. Why should write-in candidates who decide to run long after the filing deadline get the same treatment and attention as those who jump through the hoops required to qualify as an on-the-ballot candidate? The decision is not personal and has nothing to do with ideology.”

They should get the same treatment and attention because the president of a school board that oversees an increasingly dysfunction school district (Ali Muldrow) would otherwise be unopposed. They should get the same … because The Capital Times is not the city clerk but (supposedly) reports the news, fosters discussion, and supports civic improvement.

If “jumping through the hoops” is the criteria, Fanlund (His e-mail address: pfanlund@madison.com) needs to explain Toriana Pettaway. He included Ms. Pettaway among the six candidates at their 01-09-2019 mayoral forum even though “she fell short of the signatures required to make the ballot.” She ran as a write-in.

Perhaps Mr. Fanlund feared Ms. Pettaway, then the city’s racial equity coordinator, would lodge a racial discrimination claim should she be excluded. An accusation the Woke woman scattered like hard candy at an Independence Day parade. 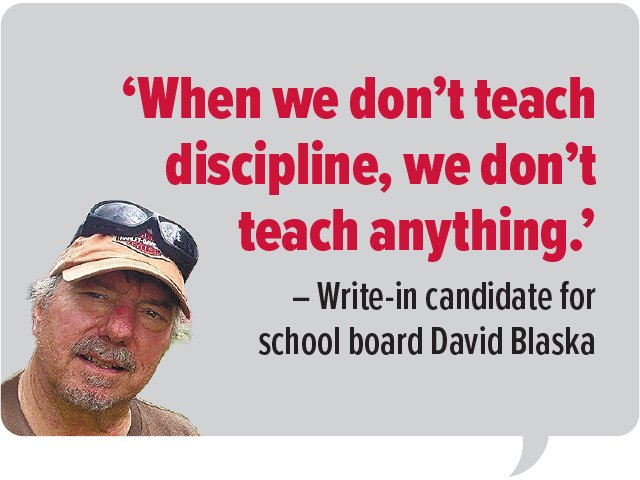 Headline in the Isthmus this week

Like we say, it’s their party. But we note the Fitchburg Star, Madison City Hues, GRUMPs, Madison East Progressives, and the WI State Journal are all covering Blaska’s candidacy. Isthmus did a write-up under the headline reproduced above. So have bloggers Dave Cieslewicz (the former mayor) and Greg Humphrey (he even endorsed Blaska!) The Capital Times did write this news story.

The Capital Times lists Simpson Street Free Press as a co-sponsor of its debate, which is odd because that organization tells Blaska it has no control over that debate. To the contrary, Simpson Street has invited Blaska to its debate two days later, 7 p.m. Thursday 03-17-22.

No hoops to jump

If Paul Fanlund wants a Don’t Rock the Boat debate he’ll get it. The Capital Times dutifully followed the lead of the social justice harassers by demanding school resource police officers be defunded. Writes puff pieces on the likes of Shepherd Janeway/Joyner and Brandi Grayson. Praised Rebecca Blank (“a huge loss!”), the UW-Madison chancellor who made a non-person of award-winning actor Fredric March despite his life of civil rights advocacy. Et cetera, et cetera. (Madison West high school drops Latin.)

Fanlund once asked “Did Madison do right by Jennifer Cheatham?” the former school superintendent. Shouldn’t a real journalist ask that question the other way around? Hold someone to account for the worsening test scores and increasing classroom chaos now spreading to the streets of Madison?

Blaska’s Bottom Line: Let’s not make this any more difficult than it need be. The Capital Times can invite whomever they want to their own debate. They just don’t want Blaska.

18 Responses to Paul Fanlund won’t jump through any hoops