Mostly not guilty of insurrection?

Only a little bit pregnant?

The usually perspicacious Jonathan Turley has rendered his verdict. “No insurrection” on January 6 because “90 to 95% of these [arrested] are one-off cases.” Charged with trespass, not sedition. “There was no grand scheme with Roger Stone and Alex Jones and all of these people to storm the Capitol and take hostages,” Turley writes.

But even the celebrated jurist must admit:

Then you have five percent, maybe, of these militia groups that were more closely organized. … some clearly came prepared for rioting with ropes, chemical irritants and other materials. Those cases, however, are a small group among the hundreds charged and an even smaller percentage among the tens of thousands of protesters on that day.

Is that not the usual prescription? The vanguard fans the crazies of the “mostly peaceful protest” into rioters? But January 6 is not about smashing glass on State Street, Madison. It was about thwarting the will of the majority to stop the constitutionally mandated transfer of power in the Nation’s Capitol. 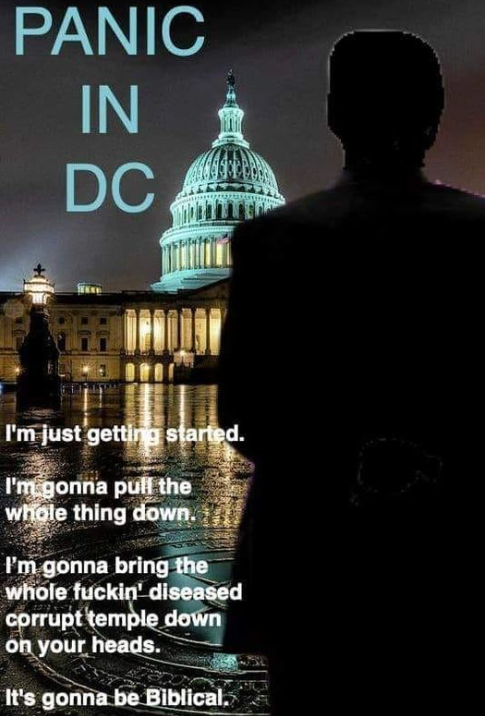 Posted BEFORE January 6 on social media

Indeed, 40 (out of 570 arrested, according to Turley’s numbers) ARE charged with conspiracy. Which begs the question: how many provocateurs does one need? Is there a mathematical formula? We doubt that actual BLM or Antifa provocateurs in even Portland OR could fill a big city courtroom. But pound social media long enough with hate and lies and soon Kenosha is burning. That’s what Trump did in the run-up to January 6.

It is well established in law (attorney Turley knows this) that the intent required for criminal culpability can be formed the second before pulling the trigger. The Electoral votes are being counted in Congress that very day, their President has just told them they were robbed, to “be strong … and peaceful” (wink wink). That he hoped Mike Pence would “do the right thing.” What were those gallows all about?

So, yes, 90 to 95% did get caught up in the moment — that is how mobs are born. The RITOs responded, having been prepped since mid-summer 2020 when Trump said adverse public opinion polls showed the swamp was stacked against him.

Move past Trump into the sunshine.

Blaska’s Bottom Line: Granted, January 6 was mostly spontaneous, lightly-armed, and often bizarre. Involving a minority (570 arrests!) of the peaceful protesters who remained outside the Capitol. Maybe only a 2 on a scale of 10, with the Whiskey Rebellion of 1791 rating a 7. But STILL an insurrection that disrupted the peaceful transfer of power.

We say this as someone who continues to demand the arrest of Freedom Inc. for shutting down the Madison Board of Education. Who does not want Republicans be be the party of crazy.

→ And now Speaker Robin Vos is giving personal updates on election integrity to the chief instigator?

Shouldn’t Vos also include Biden in his briefings?
Just to make it appear ecumenical?

36 Responses to Mostly not guilty of insurrection?