Unless it hears its own song.

The Squire of the Stately Manor has traced the improved morale of his indentured servants to their clandestine viewing — on company time — of a rival blogge. Goes by the name “Yellow Stripes and Dead Armadillos.” Run by a fellow named Dave Cieslewicz. (That last name, we believe, is pronounced exactly as spelled.) Used to be mayor of Madison WI, where the political debate is over and decided, eternal truth revealed, acceptance required, or the social justice warriors will pay a midnight visit to your address.

Ladies and gentlemen, we give you Dave Cieslewicz in “The wrong kind of social distancing:”

My neighbors are … very big on Black Lives Matter signs … and many of those insufferable In This House We Believe… yadda, yadda, yadda signs. (The last line on that sign is, “Kindness is everything.” …)

What’s curious about these signs, though, is that they don’t have a chance of convincing anyone. This is about the most homogeneous neighborhood — both politically and culturally — that you can imagine. We went about 85% for Biden in November. We may believe that Black Lives Matter, but very few Blacks are actually living their lives right here. So, people can’t be putting up these signs with the idea of advancing the cause. The choir has been spoken to and they’ve already sung.

I know Trump voters are out there. About 15% of my neighbors voted for him, but none of them felt comfortable putting up a sign. That reflects poorly on us. It even suggests that, if a neighbor were to put up a Trump sign, some of us might be unkind to him. 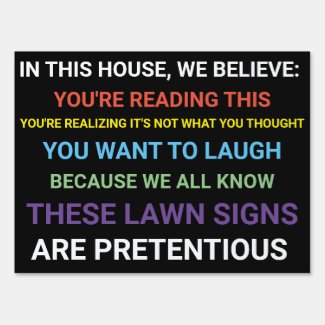 True of our neighbor bold enough to post a Trump campaign sign last Fall, replace it when it was vandalized, replace that one and then the next. We recounted the Battle of Orchard Ridge in “Our struggle against the Left’s cancel culture.”

Exactly what is progressive about intolerance?

32 Responses to The choir won’t listen