Biting into that shame sandwich

‘What the hell happened?’

Why the long face, as someone asked John Kerry after his defeat in 2004. Our liberal-progressive-socialist acquaintances are feeling blue today despite the apparent Biden/Harris victory because their poll-predicted great blue wave turned out to be a small brown puddle. The result: their President — a modern-day Millard Fillmore — will be neutered.

At CCN, Van Jones laments, “The fact that it is this close, hurts.”  Poor Jamelle Bouie of the NY Times “waited in vain for a repudiation [of Trump, of course] that never came.” Here in Madison, liberal blogger Greg Humphrey blames America for failing some “moral test” in Tuesday’s election 11-03-20. Blaming the voters is a loser’s lament. But there are lots of losers in America today 11-05-20. 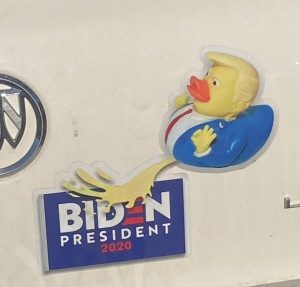 Somehow, this Buick managed to remain un-keyed in Madison WI

The roll call of losers, please:

The Trump Resistance news media (looking at you, CNN, MSNBC, New York Times, WaPost, et al.)  “The media convinced themselves that their foamy-mouthed anger  with Donald J. Trump was shared by the American people as a whole. … Even assuming the narrow Joe Biden victory that now appears likely, the media should prepare themselves a shame sandwich for lunch and devour every bite.” — Kyle Smith in National Review.

⇒ One does wonder how Trump might have performed with a mainstream news media that was half-way honest and not in the tank for Democrats.

Opinion polls — as with the 2016 election, both national and state surveys left the impression that Election Night would bring clear Democratic gains, not a cliff-hanger. Pollsters had Trump losing Iowa, Ohio, and Florida — which he won convincingly. More here.

Identity politics — “took it on the chin even in California, where voters defeated an attempt to revoke Proposition 209, the 1996 ballot measure that bans the use of race, national origin or sex by state universities and other agencies. The left has spent almost a quarter-century trying to reverse that decision, but its latest attempt lost handily.”— Mike Gonzalez of the Heritage Foundation; also Heather Mac Donald.

“Could we maybe just accept that identity politics isn’t an effective political strategy? And could Democrats just stop with it, like now?” — Ann of Althouse explicates.

Democrats’ supposed demographic lock on non-white voters. Republican hispanics flipped two House seats in greater Miami, including former UW-Madison chancellor Donna Shalala’s seat. Republicans made in-roads in South Texas as well. Trump won once razor-thin Florida by 3.6 points compared to 1.2 percentage points in 2016. Even Charles Blow of the NY Times admits, “A larger percentage of every racial minority voted for Trump this year than in 2016.”

The Democrat(ic) Party — “is in a dizzy state of morning-after soul-searching right now,” The Wall Street Journal reports. “House Democrats are asking themselves one question after Tuesday’s election stunner: ‘What the hell happened?'” Instead of picking up 15 seats, Democrats look to be losing from 7 to 12.

Campaign finance reform (aka McCain-Feingold) — Democrats outspent Republicans in 14 of 15 marquee Senate races but won only two of them (some remain uncalled but — except for Michigan — likely Republican), including $108 million against Lindsay Graham to his $70 million

National groups raised at least $88 million to take over state legislatures, support that cause, compared with more than $60 million for Republicans. Too bad. Republicans will control both legislative chambers in 24 of the 36 states in which legislatures draw district lines. Lesson: money does not buy electoral happiness.

Nancy Pelosi and Chuck Schumer — Schumer will continue to dance to Mitch McConnell’s fiddle and — if Democrats are smart (we know, a big “if”), Pelosi will be retired as Speaker of the House.

72 Responses to Winners and losers, Election 2020