Disadvantaged students need police in our schools the most

“Racial equity” has become the all-purpose justification for dubious educational policies. Equity proponents view “disparate impact”—when the same policies yield different outcomes among demographic groups—as conclusive proof of discrimination. On the education front, “equity” does not seek equal treatment for all students. Instead, it demands statistical equivalence in discipline referrals and suspensions for students of every racial group, regardless of those students’ actual conduct. — from the Manhattan Institute’s City Journal.

A riot broke out at Madison East High School during the lunch period late last September. The fighting was so intense it broke out onto busy East Washington Ave.

The police officer assigned to the school intervened but the mass melee broke into smaller tussles, then quickly coalesced into another free-for all. For a good 30 minutes the fighting continued. So many police responded — 11 more — that police radio traffic throughout the city had to be restricted to emergencies, only. The fracas was quelled only after “numerous citations” and one arrest.

School discipline is no longer about kids passing notes in class.

Undeterred, Madison’s noisy social justice activists want police out of schools (also called Educational Resource Officers, or EROs). Agitators like Freedom Inc., Progressive Dane, Socialist Alternative, and other members of the Black Lives Matter movement decry what they call the school-to-prison pipeline. In so doing, they perpetuate the misbegotten lesson of Ferguson: that police, not crime, is the problem. A receptive Madison school board is listening to them, partly because no one else is speaking.

A school board committee is in the home stretch of kicking police out of Madison’s four high schools. It next meets at 5 p.m. Wednesday, Feb. 21 at school district hdq, 545 W Dayton St.

At bottom, the Madison school board fears the race card.

“When a disproportionate amount of students of color in Madison school district are struggling, school board member Dean Loumos said it is imperative to analyze practices through a racial equity lens.” 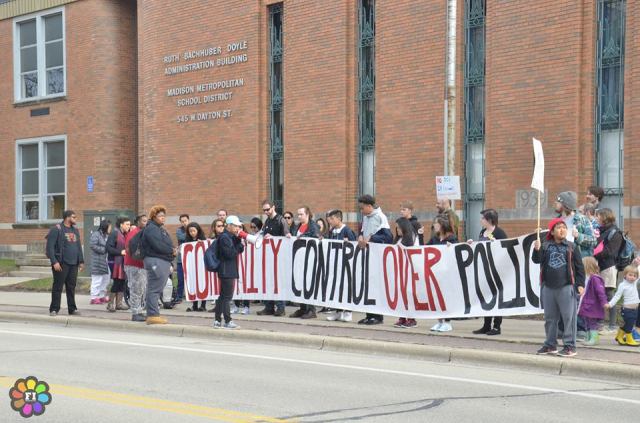 Like so many, Loumos mistakingly ascribes nefarious causation to undesirable outcomes. True, the famous 2013 Race to Equity report found that schools in Dane County are 15 times more likely to suspend a black student than a white student. But nowhere does the report blame racial discrimination. (In fact, the word “discrimination” is found only once in the lengthy document.) For the Left, everything is identity politics.

Is it impossible that black males misbehave in school more often than Asian females? Or Jewish students? Or others?

Is the only possible reason for the disparities in disciplining rates that the teachers and principals are discriminating against black males? Even when many of these teachers and principals in black neighborhoods are themselves black? But Washington politicians are on the case. It strengthens the political vision that blacks are besieged by racist enemies, from which Democrats are their only protection.

The soft bigotry of low expectations

Creating a separate but unequal standard of conduct hurts at-risk students more than helps them. “They give black youngsters exemptions from behavioral standards,” Sowell warns.

In the Obama administration, “Misguided federal agencies … made it clear that schools with a record of racial or ethnic disparities in disciplinary data could face a federal investigation. Many schools simply stopped expulsions and suspensions.” says Rep. Jeremy Thiesfeldt, a former teacher. “Negative behavior without consequences promotes more negative behavior.”

No one ever talks about the victims of chaos in our schools: students who want to learn, teachers who want to teach. “For both students and teachers, victimization at school can have lasting effects  [including] truancy,” the authors of the Education Department crime and safety study.

Police are not busting heads

MPD’s quarterly report from its Office of Professional Standards and Internal Affairs records this:

An email was sent by a school employee with recognition for an officer. The email stated she has worked with the officer for several years and has been very impressed with her ability to work with the students even when they are highly agitated. The officer’s approach to one student recently was very calm, reassuring, compassionate and very professional. The officer’s support encouraged the student to go through a very sensitive medical exam later in the week that was necessary for the case. The email continued by stating that they are grateful that the officer is with their school supporting their students.