Fireworks are ‘about to start’

The latest conspiracy theory is that the Deep State set off the RV bomb in Nashville on Christmas Day 12-25-20 to deny Trump the presidency. God, they’re good! 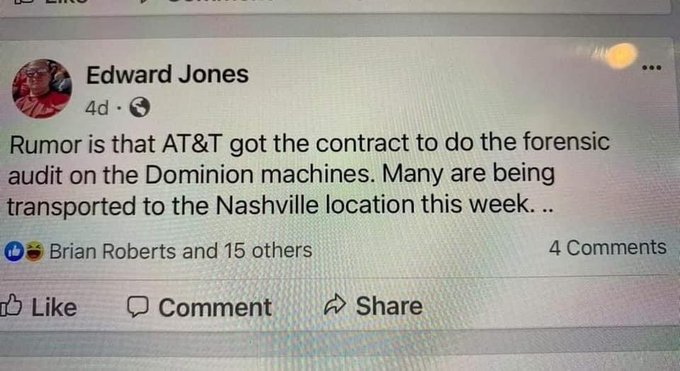 Another intrepid conspiracist finds six degrees of separation that don’t involve Kevin Bacon. “AT&T building that was bombed in Nashville has connections to Dominion.” Very tenuous connections. Russell Crowe in the movie A Beautiful Mind kind of connections. Using colored yarn. Consider the source: a website called We Love Trump.

Our progressive acquaintances are no less paranoid. Spotted on Quora: “Could the car bomb in Nashville be the beginning of Trump’s plan to declare martial law and stay in power?”

Meanwhile, question is which U.S. Senator (if any) on January 6 challenges the legitimacy of the November 3 results. Betting is on Tommy Tuberville of Alabama, who will be newly seated.

Second question is what does Vice President Mike Pence do as he presides over the Senate? “Trump (supposedly) is pressing the veep to just declare Trump/Pence the victor. Which is beyond parody.

Allahpundit reports that “Pence is hoping for a low-key Jan. 6 and is not planning any unnecessary drama.” He predicts Pence will find an excuse not to preside over the session, leaving it to Chuck Grassley.

Ol’ Sparky’s prediction: In a 52-48 Republican/Democrat(ic) Senate (IF both Georgia Republicans win), Biden/Harris will be certified the winners.