Job security, a decent pension, no heavy lifting. Nevertheless, we do pity managers at Madison city hall. For they must kowtow to the progressive party line, lest they incur the displeasure of Mayor Satya’s Brave New World. To assure correct thinking, city managers are forced to endure hours of social-justice indoctrination meted out by critical-race theorists. 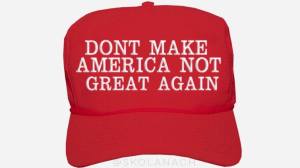 Their lesson plan declares that “Make America Great Again” (which precocious readers will recognize as the slogan of the 45th President) is actionably racist.

⇒ So it is that political thought is regulated in official Madison.

The City of Madison contracts with something called the Nina Collective, which appears to consist of Madison school board member Ananda Mirilli (who inhabits the Department of Public Instruction) and Jacquelyn L. Boggess. The latter lectures on Diversity, Oppression and Social Justice at the University of Wisconsin-Madison. All through “a racial and gender equity lens,” of course. (Isn’t everything these days?) The Werkes asked the City how much Nina is paid but has received no answer.

Mirilli and Boggess teach that “we all live in a white supremacy culture.”  (Not a Yellow Submarine?)

City supervisors were subjected to doses of this nonsense on October 13, 20, and 27. Participants began by sharing their names, preferred pronouns, and racial/ethnic identity. (Mine are “Blaska, Sir, and None of your damned business.”) 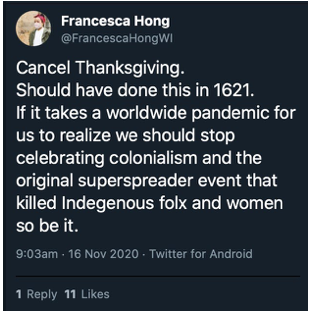 MAGA ranks just below lynching, the KKK, and swastikas on their hierarchy of racism as plotted on the “White Supremacy pyramid.” That bit of modern day phrenology is taught not just in Madison but in countless seminars throughout this troubled nation — even in private industry, where it is the equivalent of lamb’s blood on the door post. (If your company has to deal with brain-washed city bureaucrats, wouldn’t you?)

“Not believing the experiences of POC (people of color).” POC like Althea Bernstein?

It’s a closed circle. If you object to the indoctrination, that in itself is an example of racism! Indeed, “race-neutral policies” feed into the white supremacy culture!

One assigned reading is the tome, Characteristics of White Supremacy Culture. The book teaches that “‘Professionalism’ has become coded language for white favoritism in workplace practices that more often than not privilege the values of white and Western employees and leave behind people of color.”

Another requirement is, course, the New York Times’ “1619 Project.”

For radicals, politics takes precedence over everything, and every field within social science and the humanities eventually degrades into a mere channel to spread progressive orthodoxies. … If radical leftists can persuade enough people that America is rotten at its core with racial prejudice, they’ll gain traction for their program of radical social transformation.

Would YOU pass Nina’s final exam?

65 Responses to Madison city managers taught that MAGA is racist