Is the President ‘glorifying’ free speech?

Is burning down the neighborhood free speech?

Above the dartboard in the Policy Werkes break room (whose turn is it to make the coffee?) is a short list of the poor souls banned from commenting on these electronic pages. We’re too busy growing clover on the verdant grounds surrounding the Stately Manor to codify a syllabus of errors but those reasons include on-going personal vendettas and race hatred.

Depends how grumpy we are.

We must admit that the chief groundskeeper hereabouts has, himself, been warned and banned, however temporarily, from a certain on-line social networking platform thanks to a concerted effort by terminally “woke” progressives hereabout who complained of near-fatal fainting spells at yours truly’s calls for more policing. We cured that injustice by filing our own complaints against the would-be censors, who were most vitriolic and unneighborly, at that!

Now, as is his wont, the current President of the United States of America is facing down the gatekeepers of the Internet. 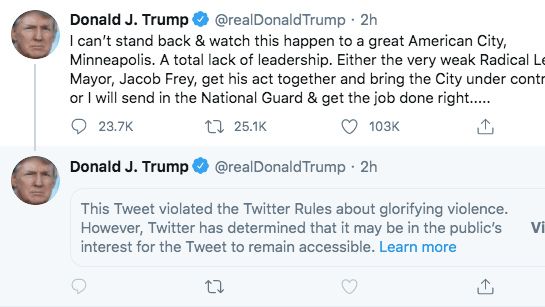 Twitter has determined it MAY be in the public’s interest?

How about letting the public decide?

Donald Trump tweeted that the Twin Cities had best restore order and protect more innocents or he will send in the military.

Twitter warned that the nation’s chief bull in a china shop had violated its rule for “glorifying violence.” Just one day after Twitter decided to “correct” a tweet from Trump decrying mail-in voting. One of our new “essentials,” Jonathan Turley, observes: “Calling for tough law enforcement is a quintessential political statement.”

“Glorifying violence” could be a standard used to curtail everything from War and Peace to Looney Tune cartoons. It is an arbitrary standard that invites biased enforcement. For example, Kathy Griffin ( the comedian responsible for the infamous severed Trump head picture) called out to her followers that Trump should be stabbed with a “syringe with nothing but air inside it.”

It is a great debate, with more faces than Eve. Is Trump defending free speech by prohibiting viewpoint discrimination? Or is he penalizing private enterprise and free market decisions?

Are Facebook, Twitter, YouTube, Vimeo, NestDoor, et al transmission lines, in effect printing presses, or are they publishers responsible for their content? Turley writes that “Twitter is given protections under Section 320 because it has claimed to being neutral supplier of virtual space for people to speak with one another.  Roughly 80 million people want to hear from Trump, not Twitter.

The Milwaukee Journal Sentinel can slant the news however it wants, even though it has a monopoly on local print news. It can also be sued for libel, although good luck winning your case.

In the aftermath of the truly horrific and seemingly indefensible police killing of a black man, already subdued, in Minneapolis, Jonathan Turley reports:

A police station in Minneapolis was torched last night as looting and rioting continued in that city. The escalating violence and looting has magnified controversies over how networks are describing the scenes. Earlier, Craig Melvin, an MSNBC host and co-anchor of “Today,” shed some light as to how his network is framing its reporting. Melvin tweeted a “guide” that the images “on the ground” are not to be described as rioting but rather “protests.”  That framing has been used on other networks, including some segments where the reporting seems bizarrely out of sync with the scenes in the background.

At least 50 people were shot in Chicago over Memorial Day weekend. The next day (05-26-2020), another 28 were shot, including a 5-year-old girl standing with her family, the Chicago Tribune reports.

“And the mayor [Lori Lightfoot] is driving around the city threatening people who are too close together,” notes our friend Bill Richardson in Middleton. “Chicago mayor vows to ‘Take Action’ against defiant churches that continue to hold services despite lockdown orders.” (Story here.)

Blaska’s Bottom Line: Then again, several social justice warriors demand (for that is what they do) the news media stop televising the President’s press conferences. Only encourages him.

Have YOU committed free speech?

21 Responses to Is the President ‘glorifying’ free speech?