Had run afoul of Godwin’s Law

Ali Muldrow is walking back her likening of police to Nazis and juvenile detention to concentration camps. Sort of. A little bit.

It’s important to talk about what it is like for the students who are arrested at school and end up in the Dane county jail. We would not talk about the role of the Nazis and act as if the experiences people had in concentration camps is a separate issue.

Police are the only people in our schools who can subject students to incarceration and the students they arrest and ticket in our schools are disproportionately LGBTQ students, youth of color, impoverished youth and students with disabilities. …

Cops can be great mentors and community members, sure, but they are the only people who have the power to arrest students and they target children with certain identities for the most severe punishments …

The blowback was excoriating. The police chiefs of Madison and Middleton and the Dane County sheriff denounced her comments. An on-line petition seeking her resignation went up this morning (08-27-19).

This afternoon, Ms. Muldrow attempted to make amends but without backing down from her implicit accusation that Madison schools and police are racist. In a  statement sent to WKOW Channel 27, Muldrow wrote:

The Holocaust is the greatest example of mass violence in modern history. There is no part of me that fails to recognize how seriously the suffering inflected by the Holocaust must be taken.

I take full responsibility for the impact of my statement. I am deeply sorry for the harm it caused people I want nothing more than to be in solidarity with as we address the injustices of today. I am grateful to the people who have challenged me to consider the many different perspectives of our community as a means of pursuing greater understanding in the interests of unity.

The conversation about juvenile incarceration and the disproportionate arrest of children with disabilities, LGBTQ+ youth, children living in poverty, and children of color at school, is a conversation I will continue to be committed to. My hope moving forward is that I will be able to apply the learning so many concerned and constructive community members have offered me to navigating this dialogue with utmost respect while striving for common ground.

As you can see, Muldrow continues to aver that teachers and police are arresting children of color out of proportion to their enrollment numbers rather than in proportion to disciplinary violations. Ms. Muldrow has never provided evidence for that assertion. She did not today. 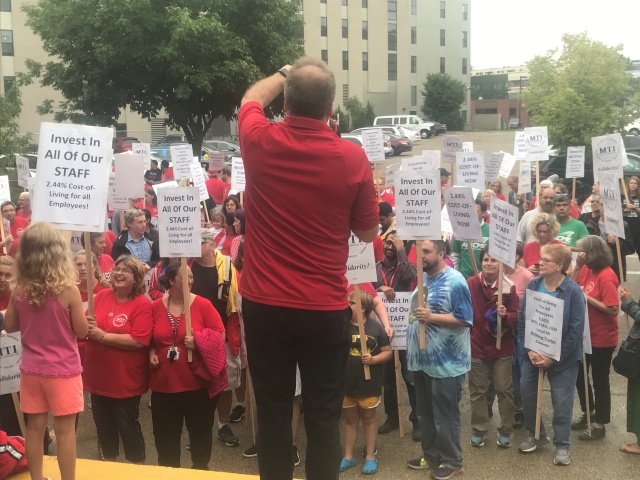 As long as MTI gets its money. Madison teachers demonstrated Monday evening outside Doyle Admin Bldg for a 2.44%, raise; the district is offering 2.32%. That’s right: just 0.12% less.

She probably needs no evidence. Most of Madison seems to agree, at least in the abstract, that this progressive Democratic stronghold is institutionally racist.

“You look around this room, and there’s a huge amount of white folks teaching black kids,” she said, according to The Capital Times.

This is the same Bettina Love who has been misrepresenting the facts of the incident at Whitehorse middle school to cast it as another chapter to Twelve Years a Slave.

“It’s time to acknowledge racism is systemic in American schools,” she wrote earlier this year in a teacher-focused publication.

In February of 2019, a positive behavior support coach who was employed by the district in Madison, Wis., allegedly physically assaulted and ripped the hair out of the head of an 11-year-old Black girl.

“Allegedly”? Anyone can allege. Police interviewed all three teachers and several of the students present that morning in class. Their conclusion: the support coach did nothing wrong. Dane County district attorney Ismael Ozanne agreed. The allegers were “drawing conclusions that are simply wrong,” he concluded.

All the right people

Didn’t stop the superintendent of schools and school board president from throwing “Mr. Rob” under the school bus before the police investigation had been completed. For that matter, several presidential candidates continue to spout the Ferguson urban myth of “Hands up, don’t shoot.” Facts be damned.

Ali Muldrow is where Madison WI is at. This partial list of her endorsements in the April 2 school board election is a Who’s Who of Madison progressivism:

Of those, only Dave Mahoney issued a rebuke, from what we have been able to ascertain.

Blaska’s Bottom Line: We said in April when we lost the election to Muldrow that it would have to get worse before it gets better. It is.