If you were never young and stupid

When Cousin Johan and your Humble Bloggeur were pre-schoolers, we thought it advisable to slather cousin’s basement (and ourselves, as it transpired) in green paint. Aunt Laura was not amused, to put it kindly.

Seemed like a good idea at the time. Which is to say young people make stupid mistakes. Especially high school boys in Baraboo WI appearing to fly the Nazi salute. Heaven help most of them if they’re ever nominated to the supreme court!

The photograph is a political Rohrsach test. Some viewers profess to see only high schoolers waving to the viewer. Indeed, some elbows ARE bent. But others appear to be doing the evil salute: arm straight out at 135 degrees, palms down and fingers tight. Or were they caught in mid-motion? (Which is why this blog ran what we believe to be an actual, unretouched photo of Hillary Clinton detailing in a similarly ambiguous wave.) 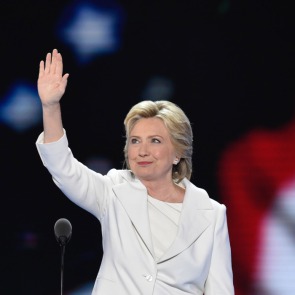 Even Baraboo students with hands down on their sides are laughing. It seemed funny at the time. Maybe you had to be there? Or just young and foolish?

The small city of Baraboo is roiled with guilt and recrimination these days. Where did we go wrong as parents, as educators, as a community? How did we raise future Waffen SS Oberstgruppenführers?

Police are investigating counter threats. The community is meeting in auditoriums where the loudest voices and the most-shrill accusations will dominate.

On slim evidence. For one thing, Sauk County went Democrat in the November 6 election.

Those who excuse Antifa’s broken windows and tolerate Freedom Inc.’s shout-down of elected Madison liberals would have a stronger case if Baraboo has been plastered in swastikas. The nights disturbed by the sound of broken windows. Illuminated by crosses burning and bull whips cracking. But no. Nothing to corroborate the presumed sudden outbreak of hate. No separate but unequal drinking fountains in Baraboo. No stars and bars. No one assaulted or battered.

They just didn’t teach enough history in the classroom. But those who crave outrage have found their fix for the week, at least. For a counterpoint, we except from Baraboo resident Dan Gunderson‘s affirmation:

“I stand with our Baraboo boys”

It was a tough week in Baraboo … Our boys were captured in a horrific picture that spread to national news outlets and seemed to reveal the underbelly of racist sentiments running rampant in small town America. Maybe that’s true in some small towns. Maybe, and very likely, Baraboo has a ways to go in being more sensitive to diversity.

But it’s also true that the image of widespread racism in rural Wisconsin fits well with a narrative many would like to believe about towns like Baraboo. Fortunately, most of us do not believe this story even remotely represents Baraboo High School students, their parents, our school system or the broader Baraboo community.

… We know our boys. We know them.They are not racists and we need to stand behind them right now. They are being attacked and intimidated. They will remember whether their community stood beside them as they faced ruthless attacks on social media, merciless characterizations on news publications, and terrifying treats through personal contacts. …

So, how did it happen? How did that disgusting picture come about? Many, many boys, along with their prom dates and many dozens of parents present, have all shared a very similar story. They were posing for prom pictures. Among other poses, they were asked to make a “hi sign.” I don’t know what a “hi sign” is or if it’s a “high” sign.

The boys say they didn’t know either, but as the goofy one-handed, straight-arm wave was demonstrated the boys complied. And yes, in that moment, it became clear to some, if not many of the boys, that they had ended up in a group pose that was bizarrely similar to something truly outrageous and, indeed, very inappropriate. And as teenage boys in such situations can do, they responded in a variety of ways. Some put their hands down. Others made silly faces or laughed nervously. Still others, yes, went for the pose with overkill. It was a spontaneous moment that was arrived at in innocence, participated in with stupidity, and finished in a blink of the eye—and with the snap of a camera.

Why do I believe them? First of all, I know the boys. I don’t know all the boys, but I know many of them, and I know some very well. And the ones I know very well would never identify with Nazi sentiments, racial discrimination, or hate. They would not have been coaxed by a call to Hail Hitler. This was not a mob frenzy similar to what happened in the Holocaust. Come on!

The whole situation has been pretty outrageous. The national media spotlight has been out of control. Death threats, boycotts from colleges, and sweeping characterizations of our community have run wild.

But nothing seems so outrageous, and indeed dangerous, as the many, many who seem disinterested in the context of the photo or intent of the students. Those who want to condemn these boys are stuck on vague statements like, “They knew what they were doing,” or “There’s a culture of hate at the high school.”

I have yet to have anybody offer an actual theory for just how the boys were instructed, or spontaneously decided, in mass numbers to honor Hitler, make a Nazi salute, or show their contempt for the Jewish people. …

Sorry, it didn’t happen. Nobody claims it happened. No witnesses say it happened. But apparently for many, it simply doesn’t matter. The boys were captured in the pose, the picture has its own meaning, and the mob is calling for justice. …

Another take from Ms. Kim Hirsch, “Virtue Signalers Swoop Down on Baraboo WI.”

There’s a picture floating around the internet of Baraboo High School boys performing a Nazi Sieg Heil salute. And you know that if it’s on the internet, it’s got to be true.