Guilty white liberals are their own parody

This is a letter to an actual advice column published August 14, 2018 by the terminally Trump-deranged New York Times. The actual advice column is called “The Sweet Spot.” This exercise in journalistic masochism is managed by two white people — themselves suffused with race shame — who call themselves “The Sugars.” They specialize in incredibly “woke” advice to the liberal-progressive-socialist in need of a weekend at the re-education camp.

The letter, on the other hand, is without question a splendid hoax, on a par with Piltdown Man and the Hitler Diaries. A savage send-up of the cult of white privilege, implicit bias, and intersectionality, exposed by a cisgendered white woman with a wicked sense of humor.

(We get this via Ann of Althouse who channels Tom Maguire at JustOneMinute. That’s how social media works.)

As it appears in the New York Times: 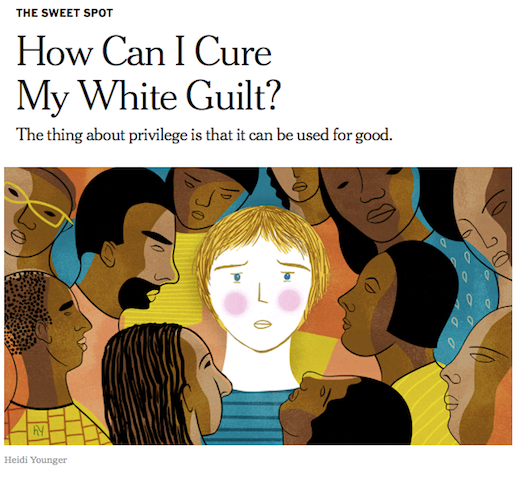 By Cheryl Strayed and Steve Almond, aka: The Sugars

I’m riddled with shame. White shame. This isn’t helpful to me or to anyone, especially people of color. I feel like there is no “me” outside of my white/upper middle class/cisgender identity. I feel like my literal existence hurts people, like I’m always taking up space that should belong to someone else.

I consider myself an ally. I research proper etiquette, read writers of color, vote in a way that will not harm P.O.C. (and other vulnerable people). I engage in conversations about privilege with other white people. I take courses that will further educate me. I donated to Black Lives Matter. Yet I fear that nothing is enough. Part of my fear comes from the fact that privilege is invisible to itself. What if I’m doing or saying insensitive things without realizing it?

Another part of it is that I’m currently immersed in the whitest environment I’ve ever been in. … I don’t talk about my feelings because it’s hard to justify doing so while people of color are dying due to systemic racism and making this conversation about me would be again centering whiteness. … Instead of harnessing my privilege for greater good, I’m curled up in a ball of shame. How can I be more than my heritage?

Maguire asks “Is this for real, or has the NY Times flipped the keys to The Onion? You know what? Go with your gut and bet ‘The Onion’. As best I can tell, the Times writers and editors are serious.”

Up steps someone named Titania McGrath to respond that she is the “Whitey” who wrote the letter and warned, “Do not deny my lived experience!” Ms. McGrath’s social media identifies her as “Activist. Healer. Radical intersectionist poet.” That only fuels speculation that she is the merriest prankster since the late comedian Andy Kaufman. From Ms. McGrath’s Twitter feed: 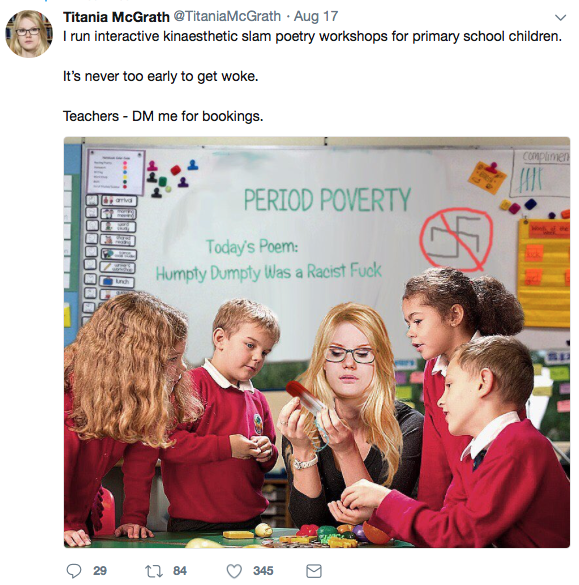 Indisputably, Titania McGrath is a live-wire, anti-P.C. whoopie cushion. But Sweet Spot columnists Strayed and Almond are (we think!) playing right into the trolling farceur’s game:

Almond: Your letter describes your place as a kind of prison cell of privilege. What you really feel is trapped within an identity that marks you, inescapably, as an oppressor. This feeling is especially acute right now, I suspect, because you’re suddenly immersed in a milieu that reflects your privilege back to you. We do live in a culture steeped in white supremacy and class bigotry, as well as patriarchal values. ….

Strayed: You don’t have to relinquish your heritage to be an ally to people of color, Whitey. You have to relinquish your privilege. And part of learning how to do that is accepting that feelings of shame, anger and the sense that people are perceiving you in ways that you believe aren’t accurate or fair are part of the process that you and I and all white people must endure in order to dismantle a toxic system that has perpetuated white supremacy for centuries. … 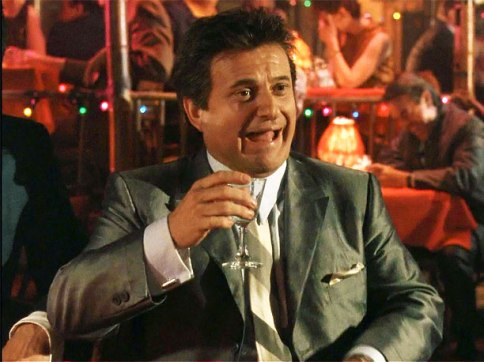 Blaska’s Bottom Line: Ms. McGrath (if THAT is your real name), we hear there is an opening for principal at Madison’s Sherman Middle School. Hellz Bellz, run for school board! You would be a cisgendered cinch!

43 Responses to Guilty white liberals are their own parody