Why defend critical race theory when you can deny it?!

Yesterday, upon the stair,
I met a man who wasn’t there
He wasn’t there again today
I wish, I wish he’d go away… — Hughes Mearns

Baby steps. This time, at least, the Wisconsin State Journal reporter bothered to report the other side: namely, Blaska and Daniel Lennington of the Wisconsin Institute for Law & Liberty.

Two months ago, Elizabeth Beyer “reported” without a single attribution: “Critical Race Theory, an academic framework that focuses on racism embedded in the nation’s laws and institutions … isn’t taught in any of Wisconsin’s K-12 schools.” Today, education reporter Ms. Beyer doubles down on that Woke fiction with these three lies:

CRT is “a wedge issue — “manufactured panic,” according to the State Journal.

Who says CRT is NOT taught in our K-12 schools? Gloria Ladson-Billings, who wrote the book on injecting CRT into the classroom. Literally! Spend some time turning over this quote from Ladson-Billings:

“When I say I use critical race theory as a theoretical tool, I’m talking about issues of policy; I’m not talking about what I teach eight-graders.” 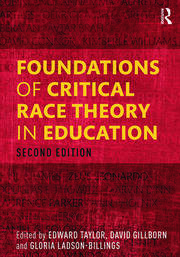 Then why is CRT taught at all?

Whether “equity, anti-racism, and questions of privilege predated the theoretical framework” of CRT, as Ladson-Billings tells Beyer, is immaterial. Montesquieu and Locke informed Jefferson’s Declaration of Independence. So what? Beyer herself reports that West high school prompts students to discuss “restorative justice, identity, white privilege, race and racism.” Yeah, kids. If you do your homework and get good grades, blame “white privilege.” That’s a far cry from teaching Frederick Douglass and Thurgood Marshall.

Blaska’s Bottom Line: Give ‘em this much, the CRT deniers are clever! Beyer helpfully quotes Ladson-Billings: Anyone who dissents from the race-based CRT lesson plan is a Joe McCarthyite. Beats actually defending CRT.

What else are our schools not teaching?

27 Responses to Why defend critical race theory when you can deny it?!