Madison’s ‘hard left’ is not progressive!

Is Madison WI ready for another local political party to counter Progressive Dane? The gray labcoats here at the Werekes say yes, not that anyone talking about such a party would want Blaska for a member. (We’re like Groucho Marx that way, but in reverse.) Blaska confesses to being 110 proof but at least he is not a nihilist.

Major players in town are actively talking about forming such a party — a year-round platform to field and support candidates for council, county board, school board, mayor, exec, etc. This new party would quit bashing Madison’s enlightened police, encourage opportunity, respect property, emphasize city services over income redistribution. Best of all, it would quit obsessing over identity politics to, instead, promote personal agency. Victors not victims!

Dane County Democrats — long players in local politics despite their statutorily non-partisan nature, have either given in or been taken over by the Progs. Both parties endorsed Paul Skidmore’s successful challenger, Nikki Conklin. Dems backed police abolitionist and overt Marxist Ald. Rebecca Kemble over Charles Myadze, an actual Democrat and labor union member who (thankfully) prevailed on April 6. 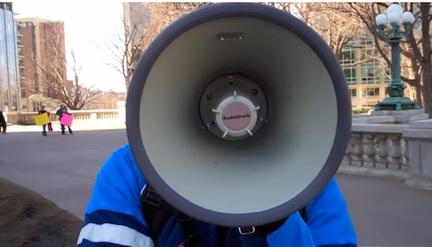 Photo by the Venerable Meade

The problem moderates have in Madison is they begin stirring only a month before candidate filing deadline whereas Progressive Dane and the other socialist splinter groups are already planning today for next Spring’s local elections. Moderate candidates are left to fend for themselves; a permanent organization would offer synergy.

In short, such a party would look a lot like former Madison mayor Dave Cieslewciz, except that he foreswears being the name on the letterhead. But another former mayor, Paul Soglin, might be. Even so, Cieslewicz is writing its manifesto — Madison’s 2021 version of Tom Hayden’s 1962 Port Huron Statement — on his blog, Yellow Stripes & Dead Armadillos. Cieslewicz (pronounced exactly as spelled) lays out its philosophy here:

[The term] “progressive” has lost its meaning, so I’ve stopped using it, unless I’m referring to the likes of Teddy Roosevelt. I have substituted “hard left” for today’s self-described “progressives.”I like “hard left” because it connotes the kind of dogmatic, humorless, rigid posture of that group.

What’s progressive about making college tuition free for families earning $50,000 just the same as those who pull down $500,000?

Today’s progressives are obsessed with the past, scouring molding newspapers to find offenses committed by inanimate objects. (I’m not making that up. See the Chamberlin Rock.) Far from removing barriers to personal initiative, modern progressives want to obliterate the whole idea of individual agency. We succeed because of our “privilege.” We fail because we have been “oppressed.” We are guilty or blameless based solely on who we are at birth.

The first and most important principle of moderation is a respect for the classical liberal values of free speech, the rule of law, tolerance and reason.

Blaska’s Bottom Line: “Armadillos” wouldn’t be a bad name for the new political party. You need a tough skin to buck the bullhorn shouters at Freedom Inc.

What would YOU call such a party?
(aside from “needed”)

21 Responses to A new local political party is gestating