A certain Republican governor who attracted tens of thousands of enthusiastic visitors to the State Capitol in early 2011 had a favorite saying. “The reforms are working!” he would say. So chagrined were spend-happy State Senate Democrats that they fled Wisconsin for scenic Rockford, Illinois and its ruinous taxes. Odd, because people who actually live there are fleeing Illlinois’ high taxes.

State and local taxes in Wisconsin last year (2019) as a share of income were the lowest in 50 years, the Wisconsin Policy Forum reported this month. Most of that improvement (from a conservative standpoint, at least) occurred since 1994 under a transformational governor named Tommy Thompson. In fact, combined state and local taxes went down by 22% in the last 25 years.

Another measure: fifty years ago in 1970 average state residents spent 14% of their income on state and local taxes. In 2019, the tax bite was only 10.3 percent. For a household with a combined annual income of $100,000 that represents a one-year savings of $3,700 in constant dollars. 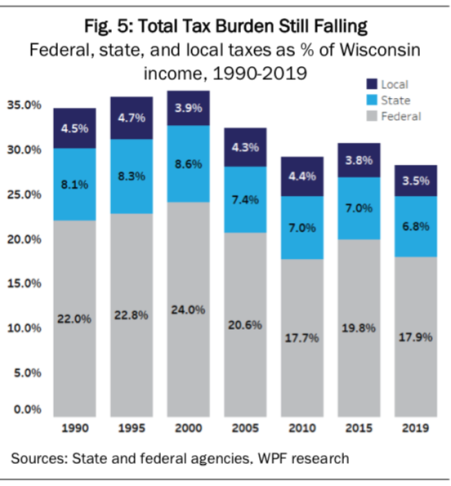 No thanks to Democrats. In the mid-1990s, my old boss and legislative Republicans:

Note well the qualifier. State and local taxes “as a share of income.” Because the record of the last 25 years verifies the principal lesson of the Laffer Curve: Taxes properly reduced can increase tax revenue.

For all you Bernie and Fauxahontas supporters, Wisconsin corporations paid nearly 50% MORE in taxes last year.  “Corporate taxes react quickly to economic conditions and part of their rise was due to the growing economy,” WI Policy Forum reports.

More coal on the fire, please!

This is sad news to the “higher taxes” crowd. But take heart, our acquaintances. Like most folks in Orchard Ridge, the Stately Manor’s property tax bill for this year (2020) increased 9.0% thanks to a 12% increase in school taxes, which account for nearly half the total local tax bill.

In what the Policy Forum calls “raw dollars” Madison’s $22.1 million property tax hike was the largest in the state and twice that of the much larger Milwaukee’s $11.6 million. (As percentage, Madison asked 7.2% and Milwaukee 4.6% more from their taxpayers.)

Of course, our … acquaintances could always move to Democrat-controlled Illinois. They need the headcount. No state lost more population in the last decade. The independent think tank called Illinois Policy reports:

Population decline reached record levels in 2018, the year after the Illinois General Assembly passed the largest permanent income tax hike in state history, while population decline in the second year of the tax increase continued at a faster rate than before the tax increase. This result comes as no surprise as the 2017 tax hike has likely deterred new investment and job creation, making Illinois a less promising state in which to find opportunity. …

Despite high taxes being the No. 1 reason Illinoisans want to flee the state, lawmakers are asking Illinoisans to approve a $3.4 billion progressive income tax hike on Nov. 3, 2020.

Blaska’s Bottom Line: Remember Illinois this fall when Madison Metropolitan School District hits you with yet another referendum to blow the hinges off the state’s spending controls. A school district that fires black and latino educators for trying to restore order in the classroom. Better yet, remember it on April 7 when you vote for school board.