People with a capacity for self-delusion

Our liberal acquaintances (for they ARE …) hate the culture wars for good reason. They’re losing.

Where Helen Reddy once roared about being a woman, her feminist successors are stumbling over pronouns. They talk about “birthing persons” or those “with a capacity for pregnancy.” Must. Be. Inclusive! The newest justice of the U.S. Supreme Court may very well be a woman and identifies as black but one thing s/he knows: s/he is not a biologist! The WI State Journal takes its usual potshot at Ron Johnson commanding these birthing persons like an Old Testament prophet to go forth and “populate the earth.”

Faced with repopulating the earth after activating Premier Kissov’s nuclear bomb Doomsday Machine, Dr. Strangelove (apparently a biologist) recommended that “since each man will be required to do prodigious … service along these lines, the women will have to be selected for their sexual characteristics which will have to be of a highly stimulating nature.” (Good advice in these times of pandemic.) None of RoJo’s four Democrat(ic) challengers could bring themselves to say the word “mother” or “woman.” Because, to say it would be “transphobic.” These are “leaders” who change the subject when biological men beat women in swimming meets. It’s what Daniel Henninger calls “compulsive wokeness.” Public opinion pollsters really ought to sample for culture. It moves the needle.

“In February when Russian troops invaded Ukraine, I started reaching out to people in the LGBTQ community there to understand the war from their perspective.” — New York Times Opinion Today.

→  Sen. Josh Hawley (R-MO) to UC-Berkeley professor: “You’ve referred to ‘people with a capacity for pregnancy.’ Would that be women?”
•   Berkeley professor (an expert on race, class, and reproductive rights) to Hawley:  ‘Your line of questioning is transphobic.'” (Read it!)

→ “Why Wokeness is the biggest threat to Democrats in 2022” — Chris Cilizza.

We write as conservatives who have accepted gay marriage in civil ceremonies and fault Republican candidate Tim Michels for denouncing same. 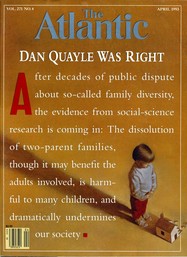 Thirty years ago, Dan Quayle criticized Murphy Brown for bearing a child out of wedlock (no husband) as a lifestyle choice. The liberal intelligentsia pounced on what they thought was another Dan Quayle flub. Murphy Brown is a fictional TV character, they hooted. Until The Atlantic magazine printed a cover story: “Dan Quayle Was Right.”

The social-science evidence is in: though it may benefit the adults involved, the dissolution of intact two-parent families is harmful to large numbers of children. Moreover, the author argues, family diversity in the form of increasing numbers of single-parent and stepparent families does not strengthen the social fabric but, rather, dramatically weakens and undermines society.

Blaska’s Bottom Line: Upon being introduced to Harriet Beecher Stowe, Abraham Lincoln commented, “So you are the little woman who wrote the book that started this great war.” Culture matters.

Enough to turn an election?