Put the punks on the hay baler!

That ain’t workin’, that’s the way you do it
Money for nothin’ and your chicks for free — Dire Straits

The last thrilling installment of your favorite blogge explored the beatdown of a graduate student near the University of Wisconsin campus here in Madison. Four young men, one only 15 years old, set upon the lone student walking home after nightfall. At random. Not to rob their victim, but to inflict pain, to strike fear. For kicks.

It occurred to the old farm boy who runs this news and opinion stand that the four punks could stand some time making hay. This fine day in June is the day for it: temperatures over 90 degrees F. A tour of the countryside Sunday between Baraboo and Waunakee shows that the first crop of alfalfa, timothy, and clover is cut and curing in abundant sunshine. Ready for the baler. 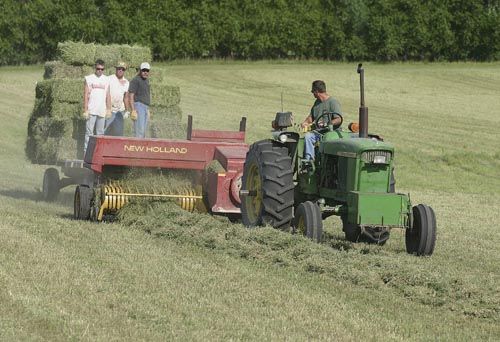 Not today’s big-bale machines but the old baler that spit out rectangles weighing a good 50 pounds each, scratchy deadweights that need to be stacked well above head high on the wagon using the armstrong method, as we called it. Properly herringboned to secure the bales lest the whole load go tumbling at the turn.

Take the full wagon to the hay barn, where more fun awaits. Disassemble the load by hand, bale by bale, for the ride up the flatbed elevator into the hay mow where another crew lays down rows of bales that will nourish the herd come winter. You’re done for the day only when the sun goes down and your cotton tee shirt is soaking wet.

Now THAT is satisfaction!

Instead, the four young thugs will be given “restorative justice,” whatever that is. Re-educated bureaucrats will apologize for systemic oppression. An ankle bracelet will be fitted if prosecution is not deferred altogether. Rinse & Repeat.

Instead of making hay, the City of Madison is midwifing another giveaway program. Five Benjamins a month for 155 lucky — strike that — UN-lucky families. No work, no strings attached, no baling hay. (Read & weep.) Spend it as you like — even a little blow. Who(m) are we to judge? Call it “restorative economics.” The progressive wet dream of a guaranteed income! Because poverty is the fault of the privileged. Not, as a black delegate to the 1988 Republican convention once told this scribbler, because “poor people have poor ways.” So judgmental!

If guilt-ridden progressives truly wanted to help the poor, they’d give them a year’s subscription to the Wall Street Journal. In today’s edition, U.S. Rick Scott (R-FL) promotes legislation that would require recipients of federally subsidized housing to get a job. The senator writes:

The American dream is rooted in a simple principle: If you’re willing to work hard, anything is possible. … For our country to thrive, we can’t let their toxic plan of increased handouts and getting something for nothing continue. We need to value showing up and going to work. … A job brings income, independence, and security.

The Werkes adds two more benefits: a job brings self-respect and consideration for others.

Thank the sweet baby Jesus there’s no tax money involved — up front, anyways. But taxpayers will pay the price on the back end for more policing. Who are these guilty philanthropists, intent on entitling more societal dysfunction? Deepening dependence on the hand out? With employers crying for workers!

Blaska’s Bottom Line: You can bet the four cowards who beat the hard-working grad student had not put in a day on the hay wagon.

How do YOU make hay?

Madison WI
View all posts by David Blaska →
This entry was posted in Crime, Uncategorized and tagged Guaranteed Income, hay. Bookmark the permalink.

34 Responses to Put the punks on the hay baler!