Getting (and delivering) their kicks!

Describes so much of the crime plaguing Madison WI and the nation these days. We get the profit motive of the drug cartels. War criminal Vladimir Putin wants something — Ukraine — even if he has to wreck it first.

We cannot fathom the motive(s) behind the school shootings in Uvalde TX. An outlet for hate? At the other end of the spectrum, why steal cars in Madison WI only to abandon them moments later, often wrecked? For the thrill?

Four punks beat a university graduate student just off campus in the 400 block of W. Gilman St. shortly after 10 p.m. Tuesday 06-14-22. “For no apparent reason,” the victim wrote later. One of three similar incidents in the last two weeks. A hate crime? The victim that night is a Chinese national. (“This isn’t the first Asian hate crime at UW-Madison,” the chancellor posted.) The assailants are black and, apparently, not Proud Boys or Oath Keepers. 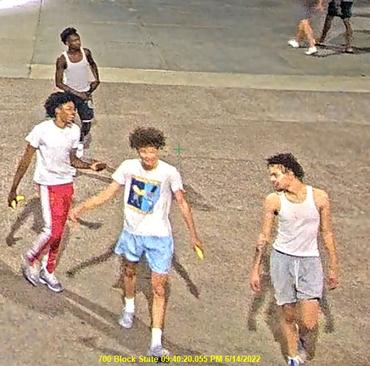 Kids just want to have fun with bananas

Brazen! Committed the assault under the watchful eye of a security camera. “My left ear and my face are bleeding, but no more serious injury,” the victim wrote. Excerpted from his on-line post:

I chose Madison largely because it is already a much safer place as compared to the rest of the US … but tonight, whether it was racial hatred or common-school violence, it still came to me.

I was walking home alone … I was about to turn the corner and head towards my residence when a group of very tall and well-dressed young guys sped up to me and surrounded me, a black guy punched me in the left side of my face all of a sudden, then I was pulled to the ground by the people behind me, followed by punches and kicks. …

A group of black girls who were partying at a bar across the street witnessed the whole attack, and they came over and sat me down, helped me call the police, handed me tissues and water, and took pictures of me. … The entire attack should have been no more than 40 seconds, they didn’t say a single word, didn’t try to rob my stuff, they just dragged me to the ground to kick me. …

I don’t even feel any anger or rage at the young men who attacked me. They are just those who have lost their basic rationalities and common sense under certain ideologies/hatred/cultures. … While trying to fight against violence/hatred, we need to raise our own awareness of safety and learn to protect ourselves.

⇒ We renew our call for state legislation to charge the parents of under-age offenders.

Blaska’s Bottom Line: All crime is a hate crime, so enhancers make no sense. Don’t know how the victim intends to protect himself, but if the Head Groundskeeper find himself downtown or on the campus late at night, he’s carrying.

How are YOU protecting yourself?

Madison WI
View all posts by David Blaska →
This entry was posted in Crime, Uncategorized. Bookmark the permalink.

10 Responses to Brazen, random, and senseless