Would you take a bullet for Madison?

What will it take?

Ask yourself this question: Would you sign up for a job where you could get SHOT?

Worse, the guy who shoots you is out on bail even after jumping a previous bail? Yeah, signature bond given by various court commissioners, including Brian Asmus. As the cases kept piling up amid months of court hearings, eventually Richardson posted $500 cash bail. “Ordered” to be home by 10 p.m. Yeah, right. The presiding judge? Former progressive Dem legislator Ms. Chris Taylor. Welcome to Woke City USA, Madison WI chapter. 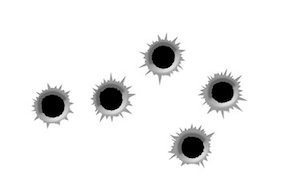 → The State Street shooting was one of five shots-fired incidents over the weekend.

Put another way, you risk your life to secure Normandy Beach. Then command hands your beach back to the enemy. That is Madison WI.

Do we wonder why Madison could hire only 24 of the 34 recruits it was authorized to hire? Makes whatever number the mayor’s budget authorizes moot. The cop haters have won.

Police Chief Shon Barnes was diplomatic but his message was clear: “People were unsure if they wanted to come into a profession that has some degree of uncertainty as to what the outcome would be,” he said, with calls to ‘defund the police’ raising questions among potential applicants about job security.” We think Chief Barnes is missing another factor that we hear from rank and file all the time: the near-futility of catch and release.

→ Madison won’t spring for body cameras on progressives’ fear that they’ll prove police were in the right.

A national survey this summer reports retirements up by 45% and resignations by 18%, as reported in the New York Times.

Many cities are also finding it harder to attract recruits, with the number of new hires in Portland falling to 30 from 69, and in Seattle to 44 from 119. After skipping any police training last year for budgetary reasons, St. Paul, Minn., received 178 applications this year, down about half from the 366 received in 2016.

As important as a new mayor and better common council is electing a district attorney with stones. Someone anathema to Progressive Dane and The Capital Times. Unfortunately, Ismael Ozanne (originally a Jim Doyle appointee) is not up for election until November 2024.

Dane County needs a crusading district attorney — someone like Rudy Giuliani or Thomas Dewey. Tried to interest former police chief Mike Koval to run last year. Has a law degree but not licensed to practice.

Blaska’s Bottom Line: A countywide election has some chance of breaking Madison progressives’ hold. Electing a Republican governor a year from now offers the small hope that s/he could fill a vacancy should Ozanne quit in mid-term.

No one is making this a black on white crime.

Madison WI
View all posts by David Blaska →
This entry was posted in Uncategorized, War on Police and tagged Chris Taylor, Katoine Richardson, retirements, War on Police. Bookmark the permalink.

17 Responses to Would you take a bullet for Madison?