Does anyone in the media afflict the comfortable, any more? By “the comfortable,” we mean the faculty lounge, the city newsrooms, and the joggers wearing face masks. Could Hollywood today make Animal House, the movie that parodied fat, stupid and drunk frat boys? (“May we dance with yo’ dates?”) Blazing Saddles? (“The sheriff is … a-comin’!”)

Where have you gone National Lampoon? Gone the way of Dr. Seuss and the pancake lady, apparently. America’s nearest remnant is Babylon Bee, which the billionaire social media moguls have in their gun sights. Which is why the neanderthals at the Werkes salute that Parisian outlier, Charlie Hebdo. 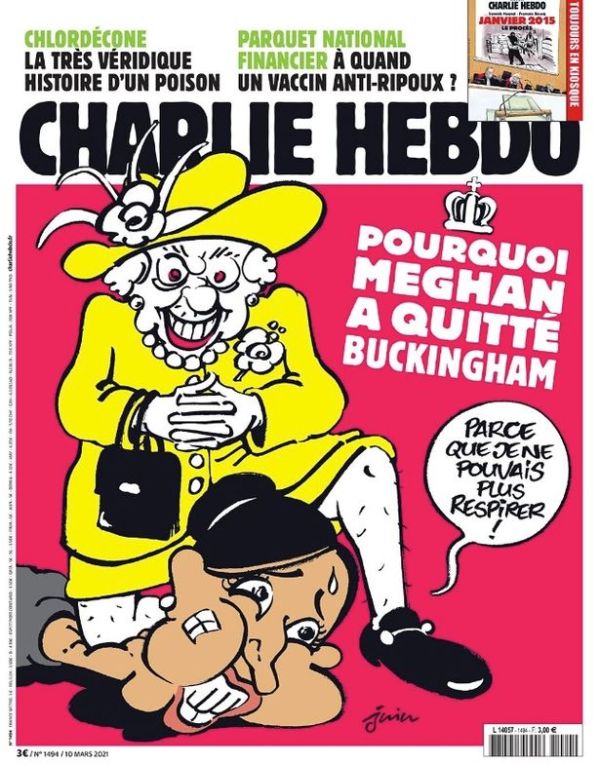 The Parisian magazine publishes in that grand tradition of Britain’s satiric political magazine Punch, founded in 1841 (discontinued in 2002). Charlie Hebdo’s latest cover expropriates the George Floyd incident to make a political point. The cover asks: Why did Meghan quit Buckingham? “Because,” she answers, “I could not breathe.“ Figuratively, the monarchy kept its knee of the poor child’s neck, is her complaint — because of her race.

The particular beauty of this particular cartoon is that neither character is particularly sympathetic. (Got to love the Queen’s omnipresent purse and pearls!) Charlie Hebdo’s  point, our gray lab coasts have deduced, is that Meghan has it so much better than the deceased Mr. Floyd. The duchesse’s case for victimhood — at the hands (or knee) of an uncharacteristically demonic 94-year-old queen — is laughable.

Like all good satire, Hebdo exaggerates fact to illuminate truth — often by expropriating other situations as metaphor. (Other tropes: the heartless cigar-chomping businessman, the castaway on that island with one palm tree, the talking dog.) Since Minneapolis, the knee on the neck has become visual shorthand for oppression. We bold-face expropriation because America’s social justice warriors are ever alert for such apostasy.

⇒ “Seven famous comedians who said political correctness is killing comedy.” Can you guess who they are?

Blaska’s Bottom Line: In January 2015, Islamic militants, enraged that Charlie Hebdo parodied Muhammed, invaded the magazine’s offices. They killed 12 and injured 11 more. Some of our local newspaper editorial pages could use a spoonful of Charlie Hebdo’s courage.

Are YOU afraid to laugh?

Madison WI
View all posts by David Blaska →
This entry was posted in George Floyd riots, Harry and Meghan, Uncategorized. Bookmark the permalink.