Explains why she took down video praising police.

“Madison Mayor Satya Rhodes-Conway said she “failed to center” a message of racial justice in a video she sent to Madison police expressing gratitude and sympathizing with officers following unrest Downtown more than a week ago,” The Wisconsin State Journal reported moments ago.

The video was always intended for police eyes and ears only but less than 24 hours after posting she took it down (as we first reported.) Now we know why.

The mayor apologized for sympathizing with the police:

“Black lives matter. I believe deeply in this and yet I failed to center this in my message to the police department,” she said in a statement Wednesday. “I realize that this action has done deep harm to the black community and for this, I apologize.”

Brandi Grayson’s Urban Triage — one of the three anarchist groups that have planned a wee’s worth of protests, trespassing, and vandalism and  sanctioned the later riots — responded to the video through a post on its Facebook page Tuesday night.

“Does this sound like a woman you can trust to create the job description for the police auditor and supervise the auditor?” the Urban Triage post read, referring to a new police monitor position the city is seeking to create.

Mayor Satya proved there is no depth to which she will not grovel:

“I cannot promise that I will not make missteps along the way as a white woman.”

The compassionate words for which she apologized

Excerpts from her kind words to police:

Amidst unprecedented protests, violence and looting. … We are all learning as we go along … you must be exhausted … It must be absolutely infuriating to stand in heavy gear outside and listen to people constantly insult your chosen profession … to have rocks thrown at you and be in harm’s way constantly … and to work so long for so many years to build relationships around the city …

I know you are working hard and doing an amazing job under unbelievably difficult circumstances and I thank you.

So sorry, apology not accepted 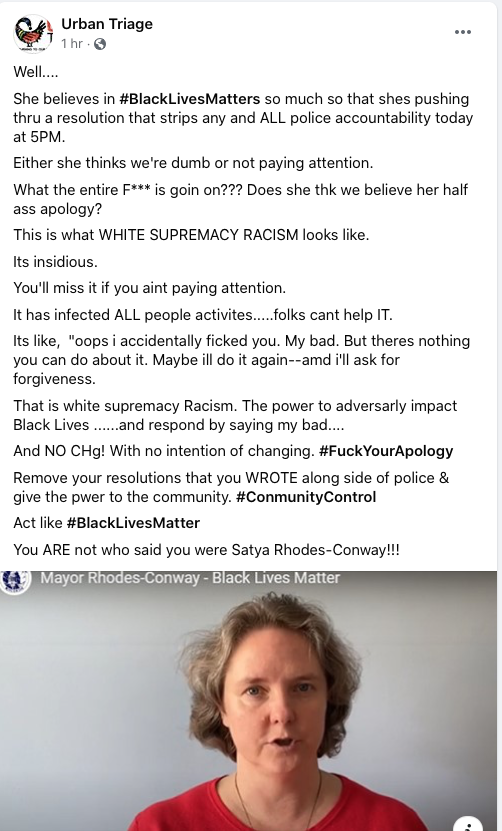 Blaska’s Last Word: “You are working hard … under unbelievable difficult circumstances and I thank you.” Them’s fighting’ words, white woman!

How low can Satya grovel?

Madison WI
View all posts by David Blaska →
This entry was posted in George Floyd riots, Uncategorized. Bookmark the permalink.