Wisconsin’s Wild (South)West is wonderful
— and not a bit frightening!

“We wanna be free to ride our machines without being hassled by The Man!” — Peter Fonda

The head groundskeeper at the Policy Werkes made good his pledge to enjoy God’s gift to southern Wisconsin, that being a fine day in May with temperatures of 73 degrees F and abundant sunshine. He would spend it among the greening hillsides of unglaciated southwestern Wisconsin. Blaska fired up his 2016 Softail Slim and pointed it toward freedom — that being out of Dane County and beyond the reach of the Safer at Home scolds. As our Republican legislators say, Yippee yi-yo, ki-yay!

In this noble quest he was joined by Stormin’ Norman Sannes on his Milwaukee Eight 114 full dresser Harley (he took the photos). We were joined by brother Bill Blaska in his outer space-looking Polaris Slingshot and a fellow named Dave on his Honda Gold Wing, who hooked up with us at the Verona park & ride.

We were inspired by our Governor, Tony Evers, who proclaimed — after his seaside Safer at Home edict was overturned by the high court — “Wisconsin is the Wild West and it is a frightening place to be.”

Our destination was anywhere but Dane County and its county-imposed Safer at Home ukase.

Our original destination was full up

Blanchardville, it is! Only 30 miles southwest of Madison, the village straddles Lafayette and Iowa Counties at the crook of Dane and Green counties. Lafayette — in contrast to Dane and Green — only “strongly encourages” its residents to “voluntarily comply” with social distancing.

This is turkey-hunting farm country; the population of the entire county is equivalent to that of Fitchburg, Madison’s southern suburb. The fire department raises money with gun raffles. Rural homes heated by outdoor wood-burning boilers, those small, green metal sheds a few yards from the house. Some of the farm houses we passed by were elderly stunners; these Italianate and high Victorian masterpieces adorned the countryside like majestic dowagers of past prosperity.

This is an old part of Wisconsin — older, really, than most of Dane County.  From here to the Mississippi and down to Galena, Illinois was lead and zinc mining country from the 1820s (the original Badgers) to about 1850. (Although the area’s last zinc mine closed in 1979.)

The flood-prone Pecatonica River flows through Blanchardville, population 825. It is hard to believe that this small village once hosted two hotels, right across from each other. The hotel building now houses several businesses including Rachel & Ray’s Pub, our original destination. We knew we had chosen wisely when we saw about a dozen motorcycles out front. But the leathered-up club riders helpfully informed the four new arrivals that they had just flooded the kitchen with their food orders. So we ventured across the street.

Blaska looks a little over-fed if you ask me; we blame the quarantine

Brother Bill attested that Lady Dawn’s Sports Bar & Grill served excellent burgers. Lo (and behold!) Lady Dawn was still observing lockdown! So the young waitress ferried our beer and burgers to our outpost under the park shelter next door — site of the old Ryan Hotel (1904) that burned down in December 2009 (then housing the Silver Dollar Saloon), killing four people.

Well, heck, we were social distancing anyway. But it was a great day to be outdoors and watch the passing scene on Main Street, which included one lady walking on the sidewalk across the street covered with a face mask — all by her lonesome. Caution? Sure. Paranoia? Ya’ think? Congratulations, CNN! 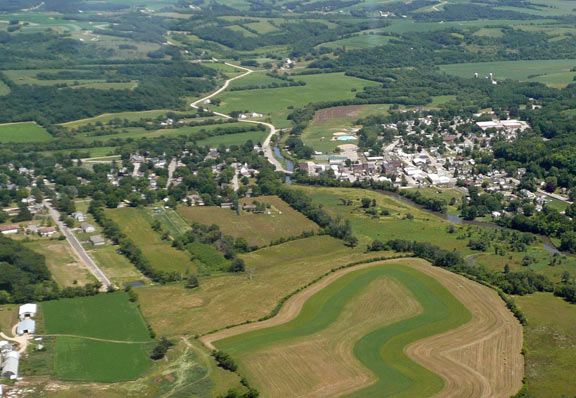 The long and winding road home

The four unmasked banditos left Blanchardville via Highway F west and turned north on Iowa County Hwy K through tiny Hollandale (unfortunately without getting a chance to explore Horseshoe Bend Road). Hwy K took us over four-lane U.S. Hwy 18 & 151 to County ID and past Blue Mound, which is southern Wisconsin’s highest point (at 1,716 feet it is 450’ above the big highway). We saw it looming over the northern horizon on our way to Blanchardville. Blue Mounds is also the eastern terminus of the lead-mining district.

The small squadron detoured over Mounds Park Road — a delightful trek through nothing but nature, before rejoining K to U.S. Hwy 14 and east through Mazomanie and back to Madison. Funny how a winding road can unwind the human psyche.

For extra credit: Ann of Althouse explores why Republicans are more optimistic about coronavirus than Democrats.

Who amongst you will throw the first road stone?

Madison WI
View all posts by David Blaska →
This entry was posted in Coronavirus, Motorcycles, Tony Evers. Bookmark the permalink.