Does the political Left have a stake in keeping the economy shut down and blaming Trump for it all?

A British news source reports that a WI Health Department official  cautions: “However, it is not possible to say if any of these cases trace back to the rally as the health department is not tracking attendance of specific events.”

For that matter, millions have died since President Wilson proposed the League of Nations. Coincidence or conspiracy? You decide.

Chuck Todd apologized on-air Tuesday for the misleading, edited quote of Atty. Gen. Bill Barr. (Winners write the histories.) Claims his staff at NBC did not make the edit of the CBS interview.

Raises the question, who DID supply the selectively edited version? The Democratic National Committee? Adam Schiff?

The judge in the Michael Flynn case wants to hear from you! Especially, one must think, if you’re part of the Comey/Mueller/Strzok deep state. Won’t take the Justice Department’s withdrawal of charges at face value. Says he will allow third-party amicus curiae submissions.

Odd, since, until now, D.C. District Judge Emmet Sullivan had refused to hear amicus briefs in the case.

Sullivan had previously held in the Flynn case that “[o]ptions exist for a private citizen to express his views about matters of public interest, but the Court’s docket is not an available option.” — More here.

The white lab coats here at the Werkes ask: If prosecutor won’t prosecute, who has standing? It’s not a civil, class-action lawsuit. It’s a criminal prosecution in which only the state (i.e. government) has standing.

The canaries are still mining coal

Tom Tiffany keeps Wisconsin’s 7th congressional district Republican. He defeated Tricia Zunker by 57% to 42% in Tuesday’s special election for the House of Reps from northern Wisconsin’s 7th District. Tiffany succeeds Sean Duffy, who resigned, but he’ll have to race re-election in the regularly scheduled November election. Tiffany’s 17-point margin is down from the 20% by which Trump won the 7th but not by much.

In southern California, Republican political newcomer Mike Garcia was likely to win a district held by a Democrat. He would succeed Katie Hill, the Democrat who resigned over a sex scandal. (Hey, we’re an equal opportunity society.)

“A victory would give the Republican Party a lift ahead of November in an election that was held mostly by mail and reflected the nation’s bitter partisan mood,” the New York Times reports.

AOC has been defenestrated by one of Comrade Nichols’ favorite political parties, the union-backed “Working Families Party,” After all, AOC helped run  Amazon’s plan to locate a major presence out of New York City. A Working Family spokesman told the New York Daily News.:

““AOC has hurt working people of the Bronx and Queens with her votes and creates disunity within our party,” No wonder why pro-union forces don’t want her, and neither do our neighborhoods.””

Man of the week

Any chance we have to catch Sen. John Kennedy of Louisiana our b&w Philco is tuned in and heated up. Tuesday night on Hannity, the Louisiana Republican panned Nancy Pelosi’s $3 Trillion giveaway to Democratic charities in his idiosyncratic, down-home, old boy patois:

“In my opinion, the speaker has moved from folly to farce, and when I saw it, it reminded me of that old Jack Nicholson line. ‘Go sell crazy somewhere else. We’re all stocked up here.’” 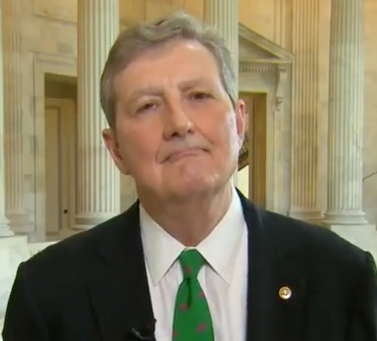 ““The pronoun police, the nature cure quacks, certain members of the media will suck it up like a Hoover Deluxe.””

With his down-home southern drawl, and disheveled appearance, the guy looks like he should be on Hee Haw with Grandpa Jones. Don’t be fooled. Sen. Kennedy got his bachelor of civil law degree with first class honors from Oxford University, Magdalen College.

Blaska’s Bottom Line: The entire Schiff/Mueller/Comey Russian collusion hoax promises to be the biggest government scandal since Watergate and Teapot Dome. You know American institutions are in trouble when the New York Post is more believable than the New York Times.

Who do YOU believe?