We honestly feel like better people after having watched George H.W. Bush Sr.’s funeral Wednesday on C-Span. (We’re sure it will pass.) But America as a whole may be better. It was so uplifting we watched it twice here at the Stately Manor.

The clear takeaway: Yes, it is what we do. But more so, it is who we are. Give us character and the policy will come along.

The funeral ceremony Wednesday (12-05-18) at Washington National Cathedral (a must visit) is the kind of balm and salve a nation requires from time to time — especially now, it seems. This one was truly uplifting. Let’s write it down as a hero’s final sortie to save his country. 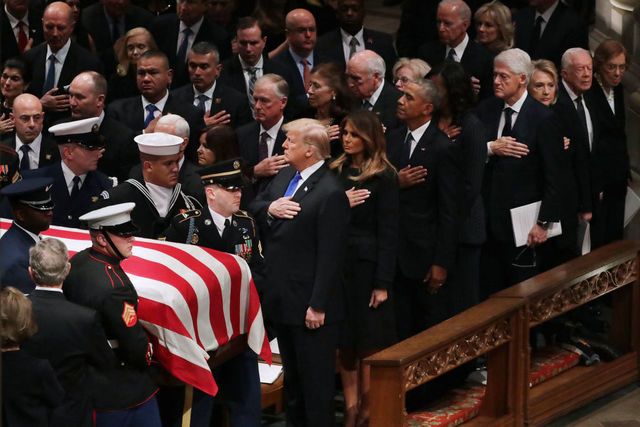 “He was an empathetic man,” the President’s son said of his Presidential father, before breaking down in sobs. (The most touching moment of the funeral. Is anything more human than laughter and tears?) “He valued character over pedigree, and he was no cynic. He looked for the good in each person and he usually found it.”

George W.’s message was an early-Christian Christmas present, without bauble or tinsel:

Dad taught us that public service is noble and necessary, that one can serve with integrity and hold true to the important values like faith and family. He strongly believed that it was important to give back to the community and country in which one lived. He recognized that serving others enriched the giver’s soul. To us, his was the brightest of a thousand points of light.

‘Not bothered by heavy traffic’

As telling as anything was biographer Jon Meacham’s story about Bush in full campaign mode in a department store grabbing the outstretched hand — of a mannequin. Realizing his mistake, Bush commented (hear the Dana Carvey imitation),  “Never know. Gotta ask.”

That the man had a sense of humor about himself, as accomplished and important as he was. “That’s why he had Simpson speak,” George Jr. said. “Humor is the universal solvent against the abrasive elements of life,” former Sen. Alan Simpson eulogized. “That’s what humor is. He never hated anyone. He knew [that] hatred corrodes the container it’s carried in.”

H.W. — “one of nature’s noblemen” — stayed true to his friend even when his approval rating with the American public was 93% (presumably, this occurred after the success of Operation Desert Storm) and Simpson’s was zero “point-93.” When advisers, their fingers always wetted and gauging the wind, said don’t do it.

Sen. Simpson (more of this guy while there’s still time, please!) observed that “those who travel the high road of humility in Washington, D.C., are not bothered by heavy traffic.” (Simpson’s full eulogy.)

Humble? We learned Wednesday (12-05-18) that H.W. never told his children about his war exploits, about being shot down over Ichi Jima. Until forced to do so by the exigencies of his 1988 presidential campaign, his eldest son said.

Jonah Goldberg wrote it first, which is why he is paid the big bucks. But I thought during the funeral that his rescue so young from near-death after his two comrades perished in battle was Saving Private Ryan’s prayer, at the end of the Steven Spielberg movie, that he would prove worthy of their sacrifice and worthy of God’s mercy. To do good one must be good.

Meacham told an interviewer that he read his eulogy to H.W. beforehand. “It’s a lot about me,” was the subject’s reaction. No gold-plated faucets for Mr. Bush. No dancing on the remains of the Berlin Wall, either, although that seems like it would have been the play. At the time, at least. Act like you’ve been in the end zone before.

The washing of feet

The indentured servants here at the Stately Manor were impressed by the pageantry — both the military and the high church Episcopal (we Catholics always say Episcopalians are Catholics without a Pope). Reassuring.

We thought the closing homily delivered by the Rev. Russell Levenson Jr. was nearly sacramental. Levenson was in the bedroom when the 41st President died. Mr. Bush’s home pastor described former secretary of state and long-time Bush ally James A. Baker III rubbing the dying man’s feet. Two great and formerly powerful men in that most human moment. Dr. Levenson related that gesture of humility and human kindness to Jesus, “after saying all he had to say” at the Last Supper, washing his disciples feet. The Son of God, in an era when donkeys walked the cobblestones, washed their feet.

“Some have said in the last few days this is the end of an era,” Levenson said. “But it does not have to be. Perhaps it’s an invitation to fill the hole that has been left behind.”

Now, it would not be Blaska if we were not a little bit churlish. But there is President Donald Trump attending the funeral of a Republican predecessor who voted for Hillary Clinton. The Bush family invited Trump even after the churlish way he treated Jeb Bush during the 2016 primary campaign. Then again, there was Bill Clinton, who defeated H.W.’s re-election bid.

“The Bushes rose above that rancor with not a discouraging word the entire week about Trump,” the Wall Street Journal editorialized today (12-06-18). “A current U.S. President should attend the funeral of a former head of state for the sake of the common national purpose and thanks to the Bushes for showing such decorum and class.”

Contrast that with local politicians shameful behavior Tuesday (12-04-18). Wisconsin’s entire Republican congressional delegation — all six of them (newly elected Brian Steil representing the First District) — attended the funeral mass of Robert Morlino, bishop of the Roman Catholic diocese of Madison. So did Police Chief Mike Koval and Sheriff David Mahoney. But where was U.S. Rep. Mark Pocan? Where was Madison mayor Paul Soglin? We get that they are liberal Democrats and the bishop a conservative traditionalist. Did Donald Trump AND the Clintons attend President Bush’s funeral? Then again, where was Scott Walker? Yes, the latter attended H.W.’s funeral at the National Cathedral on Wednesday. But so did the Republican congressmen.