Now that the balloons have popped and the keg drained, we must caution our liberal, progressive, and socialist acquaintances here in Wisconsin to temper their expectations after Tuesday’s changing of the guard. Because Wisconsin ain’t gonna change all that much, folks. 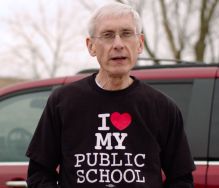 Government employees will be sorely disappointed when they realize that Tony Evers will not abolish Act 10 because he does not have the votes in the legislature. The Assembly remains overwhelmingly Republican and the State Senate is now 19-14 Republican, a pick-up of one.

Scott Walker will relinquish office after the turn of the year but his tax cuts are safe. Speaker Robin Vos and Senate president Scott Fitzgerald will not raise taxes.

Tony Evers can not pull 28,000 poor and largely minority-race kids in Milwaukee out of their chosen private schools, although he — and his teachers union donors — would dearly love to. School choice is the law and that ain’t gonna change.

Gov.-elect Evers will not abolish Right to Work. It will remain law. Voter I.D. will survive as well. Democrats proved they were able to properly identify themselves when they voted Evers-Mandela into office.

The new administration will not go on a road-building binge, though Speaker Vos may wish it, unless Fitzgerald’s Senate has a change of heart. Gov. Evers will not kick the DNR secretary out of his cabinet and restore that important agency to the direction of an unelected and largely anonymous board of directors.

Ever’s DNR will hassle large dairy farms and vegetable growers. He’ll rattle FoxConn’s cage in public but assure CEO Terry Gou that it’s just chum to fire up his base. Tony Evers is not going to chase thousands of good-paying, high-tech jobs out of Wisconsin. Those agreements have already been signed.

Here is a wild prediction: Tony Evers, coming into office as an independently elected superintendent of public instruction, could actually argue for making the position an appointive cabinet secretary. As it stands now, education travels in its own elliptical orbit instead of sitting at the governor’s table. Requires a constitutional change but the Republican legislature would jump at approving the required binding statewide referendum. Well, it could happen.

Madison WI
View all posts by David Blaska →
This entry was posted in Election 2018, Scott Walker and tagged Tony Evers. Bookmark the permalink.