We note that some of ankle-biters “infesting” (to use a presidential term) our beloved Stately Blaska Manor are clamoring for the Squire redirect his lethal gaze away from the liberal policies laying waste to the Madison public schools. Please change the subject, they beg. Why aren’t you writing about infants at the border? they wail.

Because it’s my blog and I’ll cry if I want to. That’s why. (You would now, too, if it happened to you.)

But O.K., here goes. Send more adjudicators down to the border. Bus them in, drop ‘em in like paratroopers hitting the beach. Process the refugees in the drive-through lane. Same-day service. One-Hour Martinizing. Let them through or turn them back as a family. Do not pass Go. No fuss, no muss.

Donald Trump drives the Good Humor ice cream truck blaring Guantanamera from its one tinny speaker. (Over and over and …) Dispensing Dream(er)sickles to the little terrorists. Great optics.

Satisfied, ankle biters? No? Back to Detention Camp with you. Or Room 120 for some restorative justice.

Thinking outside the Square

Now, onto something that interests The Squire: legislative redistricting. 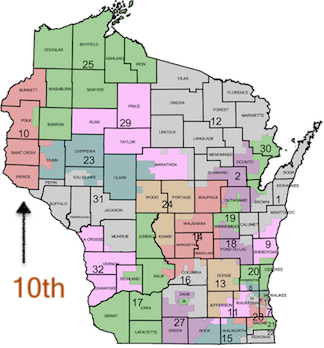 Our … acquaintances express frustration that the U.S. Supreme Court Monday did not strike down Wisconsin’s supposedly gerrymandered legislative districts. They should be frustrated because that map likely will remain in force for the 2020 election, which will elect the legislature that will draw the new map following that year’s Census.

The Democrats’ case rested on a supposed formula measuring something they call the “efficiency gap,” which measures the number of “wasted votes” that do not contribute to winning a legislative seat. Democrats settled on an arbitrary number — 7% — as being unacceptably “inefficient.”

The wasted votes were achieved, they allege, by packing all the Democrats into a few districts and “cracking” other liberal strongholds among several districts so as to render the Democrats as minorities.

We discussed all this in “Why the Democrats’ ‘efficiency gap’ is a crock.” (Pay attention, people!)  → For Extra Credit, see Judge Jim Troupis’ take on Gill v Whitford.

What our liberal-preogressive-socialist acquaintances cannot grasp is that a properly functioning court does not act as a super legislature. It apples the law as written against constitutional principles.

“This Court is not responsible for vindicating generalized partisan preferences,” Chief Justice John Roberts wrote in a 9-0 decision. Instead, the court asked what harm was incurred by the named complainant, emeritus UW Law School prof Bill Whitford. The Democrat resides in Madison’s 76th Assembly District on the isthmus. Represented by, in reverse order, ultra-liberal Democrats Chris Taylor, Mark Pocan, and Tammy Baldwin. It votes 82% for Democrats. Under the Democrats’ alternative and “fairer” map it would vote — get ready for it -— 82% for Democrats!

Now, we have no doubt that the Republican legislature gave endangered incumbents the benefit of the doubt with a tweak here and a tug there. But your perspicacious Squire reminds the lip movers that Two Men and a Truck did most of the packing.

“The Gill v Whitford  plaintiffs would have judges determine whether an electoral map has the “right” number of Democrats or Republicans,” Attorney Katherine L. McKnight writes in today’s Wall Street Journal.

“The Supreme Court is right to press plaintiffs on harm: What kind of harm does a conservative Democratic voter endure when the district elects a moderate Republican?” McKnight asks, rhetorically.

Seeking court protection for Democrats and Republicans as such [is] more protection than is afforded historically protected classes including racial minorities.

In any event, some vote Republican in one election and Democrat in another, often on the same ballot. Wisconsin is celebrated and notorious for split-ticket voting. These people are called “independents.” McKnight notes that one-third of Wisconsin’s counties voted for Barack Obama twice and then for Donald Trump. (Those racists!) No packing or cracking necessary.

Consider that in January’s special election, northwestern Wisconsin’s 10th Senate District went 54-44% Democrat after being Republican for 17 years and carried for Trump 55% to 38%.

The same thing occurred pretty much in the First Senate District in last week’s special election. That both flips occurred in Senate districts may be no accident.

Two deep thinkers* propose a combination of ranked choice voting with a form of proportional representation; that is, each district would elect multiple legislators.

In “ranked choice voting,” a voter indicates his top 3 (or pick a number) choices among, let’s say, 6 candidates. The last-place finisher is eliminated and his voters are apportioned to whomever they picked as second or third choices. And so on until one candidate attains a majority.

Some non-partisan municipal elections here in Wisconsin already elect multiple office holders for the same jurisdiction as, say, the top three vote-getters for alderman or town supervisor. That could work independently of ranked choice voting or with it.

Until 1980 Illinois did something of the same thing. Each legislative district elected three members at large. Each voter got three votes that could be distributed to either one, two, or three candidates who survived as the two top vote-getters in each party’s primary. That system is known as “cumulative voting.”

That system would lend itself to ganging up in favor of one candidate. A fairer system might be to limit the voter to one vote per candidate; the voter could vote for one, two, or three different candidates but not all three votes for a single candidate.

The afore-mentioned * deep thinkers are the executive editor of National Review. and executive director of FairVote, a nonpartisan electoral reform organization. The contend their system would elect Democrat(ic) congressmen in Oklahoma and Republicans in Connecticut.

“That would replace winner-take-all voting — whereby up to 49.9 percent of the voters win nothing — with fair representation where the majority elects the most seats, but everyone gains the power to elect their fair share,” National Review and FairVote contend.

Blaska’s Bottom Line: Wisconsin could easily elect three state reps from each Senate district; say, from among the top five vote getters in the primary elections regardless of party, including independents. That would allow the occasional Democrat in a Waukesha County district and the occasional Republican in Dane County. But probably not in the 76th District.

2 Responses to Gerrymander THIS, losers!