No official position on independent police auditor, but many problems cited

The Madison Police Department this morning (01-31-18) responded point-by-point to the 146 recommendations contained in the Berkeley California police consultant’s $372,000 report. The Blaska Policy Werkes has culled the major points from that 76-page police response (illustrated!) to the OIR group. 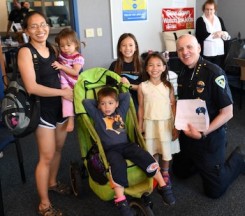 The most far-reaching of the OIR recommendation, the Werkes believes, is OIR #146, to create an independent auditor that would report to a newly created civilian police review commission.

At least for the record, MPD said “it does not take a position opposing the concept of an independent auditor.” However, the response listed several problems, which this blog has pointed out before. The Madison Police response, summarized:

Police agencies that have them are larger agencies with a history of problems, many in from that have no police and fire commission. And they are expensive. Denver’s (suggested by OIR as a model) has 14 employees budgeted at $1.5 million a year. Plus the potential MPD expense of complying with its data requests.

MPD also alleges that the recommendation is OIR boilerplate: “it was clear that a recommendation for an independent auditor was not in response to inadequacies in MPD’s internal investigative process or use of force practices.” In addition “the auditor and commission must be insulated from the political process, and be staffed by those with significant relevant expertise. Striking the proper balance between knowledge and public credibility is difficult.”

The city attorney weighed in, saying he “may support this recommendation. Before doing so we would want to know specifics” on how the auditor’s office would be set up, who would supervise, cost, and independence — “not subject to political will and not in violation of the statutory duties and obligations of the PFC.”

The Cop Haters who argued against adding more police seized on the OIR report to maintain that no one knows what patrol officers actually do. To OIR’s suggestions #38-39 that neighborhood officers and patrol officers prepare daily activity logs, MPD responded:

“Contrary to the report’s suggestion, there is a significant volume of data available regarding the daily activity of patrol officers. Most of the work that a patrol officer does is tracked and this information can be extracted and analyzed. The annual output for MPD’s patrol function contains millions of data fields; this allows for a great deal of analysis into patrol officers’ work.”

As for neighborhood officers, “In addition to the traditional measures, other community policing activities are captured. These include foot patrol, community events, neighborhood meetings, etc. However, the utility of this is still quite limited. We can measure outputs (how many neighborhood meetings were attended or how much time was spent doing foot patrol) but not the outcomes of the activity (Were the encounters positive? Did the efforts improve community trust? Etc.).

[The report includes an example of a resident driving with a suspended license.] “How would such an encounter be noted? How is the outcome captured in any meaningful way? Providing a narrative description of the encounter does not allow for the aggregation of data in any useful way.”

Further, “We are not aware of departments of our size or with our workload who have all officers complete daily logs. Nor are we aware of any evidence that daily logs lead to improved officer performance or public safety outcomes. Requiring daily logs would, however, clearly require a massive expenditure of officer time.”

OIR #68-69 wanted MPD to obtain a statement from the officers using deadly force and before being release from their shift and before the officer reviewed any materials relating to the investigation. The summary of MPD’s response:

That forces the department to interview an involved officer before even the department knows what questions to ask of an incident still warm to the touch. The city attorney added that this requirement “would be a violation of their Fifth Amendment right against self-incrimination to compel a statement after a critical incident.” In any event, the State Justice Department controls such investigations.

OIR #90 wanted police to go beyond the standards set down by the U.S. Supreme Court in use of force. The city attorney responded that it “is aware of no police department in the United States who subjects its officers to a more stringent standard for using deadly force.”

OIR recommended (#13) that MPD should conduct town halls and listening sessions soon after all critical incidents, including officer-involved shootings. MPD pointed out that such public sessions would compromise the state Department of Justice independent reviews mandated by state statute since 2014.

OIR broached the subject of body cameras in #135-139 but never recommended for or against. MPD responded with pro’s and cons:

“We recognize the value that body worn cameras can provide to both the department and community in a variety of contexts. These include assisting in a criminal prosecution, providing clarity in the aftermath of a critical incident, or resolving an allegation of improper officer behavior. … Like the in-car video systems, body worn cameras have significant limitations, and can create unrealistic community expectations. The OIR report summarizes these nicely. In addition to the operational limitations of body worn cameras, the cost is significant. The initial equipment cost for a broad MPD deployment of body worn cameras would exceed $1 million, and additional staff positions would be necessary to process public records requests for video footage. The department’s budget priority remains staffing, as additional commissioned personnel will have the most positive direct impact on the community.

“… the decision to move forward with a broader deployment is that of the Mayor, Common Council and community.”

Cops in the schools

OIR in #15 and #57 recommended MPD allow police to wear “soft uniforms” (that is, alternative uniforms) for police in certain settings, including education resource officers in the high schools “as a means of reinforcing the unique mission of these officers.” MPD responded

It is important to note that EROs have routinely found themselves in the midst of significant disturbances and confrontations while in the schools. The “soft” uniform can adversely impact the EROs ability to respond effectively or be identified as an officer while doing so. The department will maintain the current practice of utilizing the standard MPD uniform for EROs, while allowing for a “soft” uniform to be approved for specific assignments.

OIR #2 wanted “Unpaid Ticket Resolution Days” held annually or even more often. That, the police said, “would be a self-defeating project. Once offenders know that all they have to do is wait a few months and their ticket will be forgiven, the deterrent effect of a citation is gone.”

The MPD and city attorney also itemized 19 errors of fact in the OIR report.

Blaska’s Bottom Line: Most of OIR’s 146 recommendations (Moses only had 10!) were in the form of “consider” or “keep doing” and MPD promised “we will.” The consultants dodged the bullet on body cameras and recommended investigatory practices after deadly force incident that unconstitutionally impair the rights of a potential defendant, violate state statute, or impair the effectiveness of an investigation by forcing the department to interview police before the department itself may be prepared for the interview.