What was your New Year’s resolution? More civility toward those with opposing views? Reaching across the aisle to find common ground? Not if you are the hyper-partisan Capital Times.

The CT takes as its sacred mission to “consign Scott Walker to the dustbin of history.” 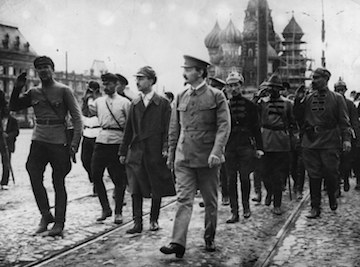 The Blaska Policy Werkes gets policy differences. We understand rough and tumble. But The Capital Times is drowning in its own hateful bile. Its editorial today will persuade no one not already convinced that Walker drowns little puppy dogs.

Really? The year 2017 was terrible? The UW Badger football team went 13-1 and won the Orange Bowl. Construction cranes tower over Dane County. The corn harvest was good. UW tuition frozen for five straight years. Property taxes lower (on average) than when  Scott Walker took office. Epic is hiring. The stock market is soaring (up 25% for the year)!

That was the one beef our liberal-progressive-socialist acquaintances had against Walker. That he had fallen short of an ambitious campaign pledge to create a huge number of jobs. The Capital Times used to publish job-creation charts showing Walker short of his goal. (Here’s one from June 2014).

Why did they quit running those charts? Because Walker is making good on his pledge. “From Foxconn to sausage makers, Wisconsin companies in expansion mode,” the Milwaukee Journal Sentinel headlined on Christmas Day. But 2017 was terrible! 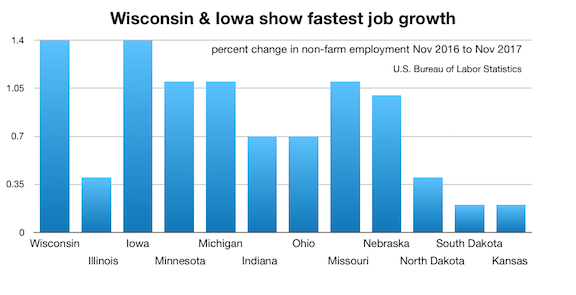 Outside The Capital Times distortion zone, Wisconsin led the Midwest in job growth over the last year. Our unemployment rate of 3.2% is much better than the nation’s 4.1%. Certainly better than the teachers union-dominated state to the south, which is bleeding population, defaulting on its debts, and nearing junk bond status.

So now The CT is forced to do backflips to explain away the thousands of good-paying jobs Foxconn will bring to the state. It pretends that the $3 billion in promised tax forbearance will come out of the pockets of Wisconsin taxpayers when, in fact, that figure represents new tax income that won’t be collected. It even quibbles that Foxconn will be situated in the southeast part of the state — never mind that is the location of the largest city and most of the state’s population.

If Jim Doyle had managed to bring those jobs, you know who would be singing a different tune.

So we move on to outright falsehoods. Scott Walker is “the most politically corrupt governor in the state’s history.” Except that he is not, by a long shot.

If you want history and corruption, there was William Barstow, a Democrat, who won in 1855 due to forged election returns from nonexistent precincts in the sparsely populated north, “in addition to other irregularities,” before he was removed from office. For that matter, Jim Doyle illegally raided the Patients Compensation Fund. And bought huge campaign contributions from the Indian tribes by trading them gambling rights. But Doyle was a Democrat. 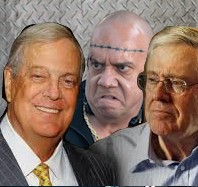 Typical of demagogues throughout the world, The Capital Times must create bogeymen. The Koch Brothers will do nicely. The editorial mentions them no fewer than six times. As if they were Idi Amin instead of free market advocates and generous philanthropists. As if they contributed even a tenth of Walker’s campaign financing. The voters who three times elected Scott Walker? “Toadies” and “political hacks.”

But then, the CT never had anything good to say about Tommy Thompson, Lee Dreyfus, or Warren Knowles — because they were all Republican.

Circling back, the phrase “consign Scott Walker to the dustbin of history” lit up Ol’ Sparky here at the Policy Werkes. Sure enough. The first to use it was the brutal Russian Bolshevik Leon Trotsky. Here is the murderous old Communist reading out the more moderate Mensheviks in 1917:

“You are pitiful, isolated individuals! You are bankrupts. Your role is played out. Go where you belong from now on – into the dustbin of history!”

Why should 2018 be any different? The comrades at The Capital Times cheered the illegal takeover of the State Capitol with bullhorns, defended the UW speech codes, covers for the speech police, demagogues business people, demands income redistribution, plays identity politics, and delegitimizes free and open elections. So it stands to reason they quote Communists.