Our schools are unarmed and dangerous

Do we trust our teachers or not?

Back in the day, a columnist for the Milwaukee Journal Sentinel thanked his employer for safeguarding his well being against readers who might be infuriated by his progressive maunderings. How was he protected? The newspaper building was plastered with “No Firearms” signs.

As if a meth-head survivalist barreling in from the wilds of Oconomowoc, locked and loaded with enough firepower to free a small Caribbean island, would be stymied by a placard! Imagine the would-be terrorist’s frustration as he confronted the inert piece of plastic: “Damn! All this way for nothin’. Wonder if the Domes are open.”

Robb elementary school was posted, fenced, and locked. (Except, inexplicably, for one back door.) The Uvalde school district drilled students and staff in emergency procedures. Can we do more? Sure. Universal background checks, hike the age of gun ownership, end the gun show loophole. Not surprised if Republicans accede to some or all of the above. More mental health treatment? Bipartisan! Devise new algorithms to detect potential shooters? More Big Brother, please. Enact red flag laws? Just remember that courts tread slowly when they’re asked to deprive rights. Ask stalking victims how many court orders are obeyed.

Ban the AR-15? No more deadly than any other semi-automatic firearm. Already 15 million in circulation. Law prof Jonathan Turley explains. 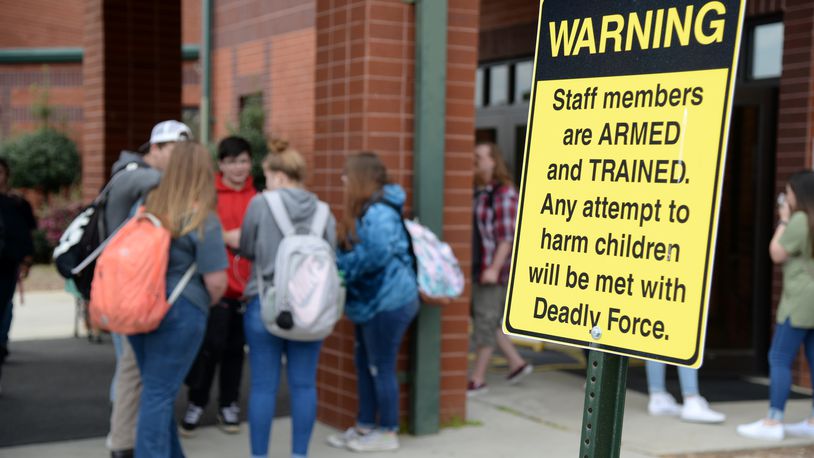 Which is more traumatic?

Yes, Uvalde employed armed school resource officers who, contrary to first reports, did not deter the shooter. But that’s just one person and we don’t know (as of this writing) whether full-time at the Grades 2 through 4 elementary school. Madison schools don’t even have that, thanks to intimidation from our Woke warriors. Their mantra was that police traumatize kids of color. You think that maybe all of Uvalde TX is traumatized today? A Nation? We said 05-25-22:

Glad to see that WI Assembly Speaker Robin Vos is on the same page. So is the Texas attorney general. But not Wisconsin’s AG.  Rob Kaul, good Democrat that he is, freaked out. “We can’t be turning our schools into war zones,” he said. “It’s not going to make them safer. In fact, it would make them more dangerous.”

How safe was the school in Uvalde TX? Ask the husband of one of the two slain teachers. He died of a broken heart two days later. How were those fourth-grade classrooms not a war zone? If one of those teachers had been armed, might some of the innocent deaths been averted? Even if some of the students were caught in the crossfire?

Colorado, Montana, Indiana, and Ohio, allow armed teachers if permitted by the school district. Missouri and Montana law explicitly authorize teachers or other staff to be armed. — Rand Corporation.

Do we trust our teachers or don’t we? Have their backgrounds not already been checked? Might some have had military training? Volunteers only. Registered with the school district. Training on the firing range. Indemnified. Anonymous. Could be Mr. Brown or Mrs. Wychowski, the shop teacher or the lunch lady. Their possible presence posted at every entrance and fence.

Blaska’s Bottom Line: Let’s face it, sports fans: There is no magic bullet (please pardon the metaphor) to ending school shootings. But a “No Firearms” sign is an invitation to mayhem. As is Madison’s emotion-driven expulsion of school resource police officers.

Do YOU trust teachers?

Are guns and abortion political game changers for Republicans?

Madison WI
View all posts by David Blaska →
This entry was posted in Gun control, Uncategorized. Bookmark the permalink.

25 Responses to Our schools are unarmed and dangerous