Voters are the grandest of juries

Purge not, lest ye be purged!

The red queen of crazy is Marjorie Taylor Greene. We tuned in to C-Span to watch, live, her inquisition by a Left-wing interest group before a state government tribunal that will determine whether the Georgia Republican will be stricken from the ballot. The charge: her seeming encouragement and later defense of the January 6 insurrection a year ago. The pretext is the Disqualification Clause of the Constitution’s 14th Amendment banning insurrection.

Problem is that Greene has not been convicted of same in a court of law. Her case is being tried by an administrative elections law judge. The Left-wing group trying to deny voters their say is parsing her use of the term “1776” as some kind of code. 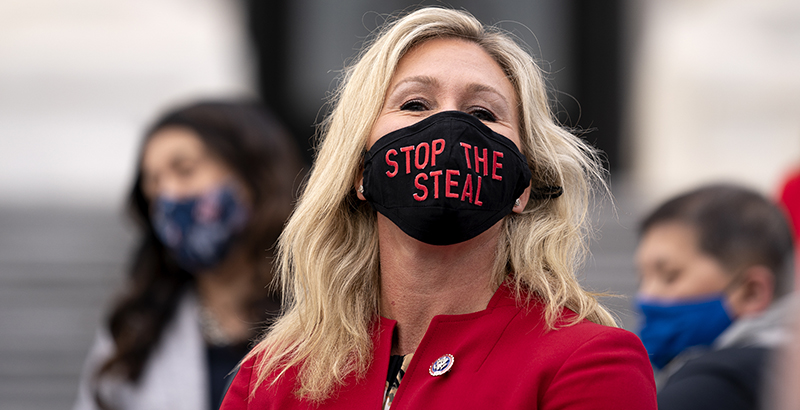 Got to admit, she’s fun!

We take our election law from experts like Wisconsin’s own James Troupis, National Review’s Andrew McCarthy, and George Washington University law prof Jonathan Turley. The latter points out that it takes an act of Congress to disqualify under the 14th Amendment, not a state board of election. Turley decries “a new movement to defend democracy by denying it.”

Let’s be clear: Greene is an election denier, a Trumpbot, and — at the very least — an insurrection apologist. She makes France’s Marie Le Pen look mainstream. We are further put off our Lucky Charms by Greene’s evasions. Instead of “I don’t recall,” how about a little courage of your convictions, witchy woman? How about “Yeah, I said it then and I say it now!” Instead, she takes the Kevin McCarthy route.

• Remember when Trump demanded that Germany and its neighbors pay their fair share for NATO? Seems prescient today.

• The legislature giveth, the legislature taketh away. Disney was given special privileges — probably to entice development of Disney World in the first place. Now Disney is fighting state legislation. That is their right, but they have no intrinsic claim to the special, self-government and tax-avoidance privileges that dwarf whatever Scott Walker promised FoxConn.

• Drives us crazy. Facebook-only friends who post pictures of snow, blooming flowers, exotic birds, etc. and locate them “Here.” Please to divulge, where the hell is “here”?

• Tim Michels will not be able to buy his way past Rebecca Kleefisch. You got to show up at party functions. The Fond du Lac County millionaire has been AWOL since losing to Russ Feingold 18 long years ago.

• Maybe the Brewers should disregard the DH and let pitchers hit. At .204, Milwaukee has the 3rd lowest batting average among the 30 teams. Cincinnati is worst at .186, the Cubbies lead at .273.

Congress can and has refused to seat several election victors since the Civil War. One such was Milwaukee socialist Victor Berger in 1918. He, at least, was convicted of war-time espionage in federal court, albeit under Woodrow Wilson’s totalitarian regime. Milwaukee held a special election to fill the vacancy and Berger won that one, too. The House again refused to seat him.

Blaska’s Bottom Line: We continue to believe that the only jury that matters — the best jury of all — are the voters on Election Day. Yeah, some of us still believe in elections.

Do you believe in magic in a young girl’s heart?

4 Responses to Voters are the grandest of juries