When have you spoken out under your own name?

Today marks the first day Dane County is allowing the citizenry to breathe free. Yeah, the mask mandate has been listed. Blaska Stately Manor has been bare faced since Day One!

Except Madison schools. They’ll make a decision in another month and a half — April 15! Los Angeles schools are mask free, but not Madison. 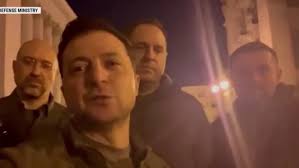 Madison found another slave-owner: Thomas Jefferson. We propose renaming that middle school after BLM social justice warrior Brandi Grayson and be done with it. How about Jennifer Cheatham? This remains her Woke school district. It is disheartening that only four candidates declared for three Madison school board seats, hence Blaska’s write-in candidacy. Where is Madison’s courage?

Watching the Badger bucketball boys play Purdue tonight. During time-outs may flip to the show in Washington D.C. Are Republicans divided? Yes, between RITOs and so-called RINOs (but we have bodacious horns!). Democrats are divided, too. Normally, the minority party responds to the President’s State of the Union address. But two Democrats will counter Uncle Joe tonight 03-01-22. Rep. Rashida Tlaib (D-MI) on behalf of the Working Families Party, a far-left socialist party active here in Madison WI. Rep Colin Allred (D-TX) will deliver a response on behalf of the Congressional Black Caucus.

Republicans will settle for the one traditional response. It will be delivered by Gov. Kim Reynolds of Iowa. Erick-Woods Erickson quips: “Like every other person who has delivered a State of the Union response, this will be the end of Gov. Reynolds’ career in politics and we thank her for her service.”

A perspicacious reader notes that Blaska has changed his tune on Ukraine. An heroic stand against tyranny will unclog even the most hardened of arteries. We doubted that Ukraine was a nation. If it wasn’t before, it is making itself into one — as the American Revolution united the disparate colonies. Volodymyr Zelensky is its George Washington.

The grey lab coats at the Werkes watch C-Span to thrill in the uninterrupted give and take of democratic debate. Mitch McConnell besting Chuck Schumer in the U.S. Senate, Question time in the UK’s House of Commons (harrumph!), and Pierre Trudeau digging himself deeper in Canada’s parliament. Last week in the United Nations Security Council, the ambassador from Mexico supported Ukraine. “We know what it’s like to be invaded. We were invaded four times: twice by France and twice by the United States. They took half our territory.” (Sound of serious throat clearing from the American ambassador.)

Got to think that Putin’s attack on Ukraine will convince even Belarus they’re sleeping in the wrong bed. Poland, Hungary, Slovakia know all too well what it’s like to live under repression. Even preternaturally neutral Switzerland is moved to take sides. That takes courage! Ukraine is one more proof that choice in the marketplace of ideas trumps coercion in the long run. (Support school choice!) Russia may yet subjugate Ukraine but it will have won only a festering sore.

Blaska’s Bottom Line: Too many here in Madison and elsewhere fear speaking up against the idiocy — Woke racism and Trump’s attempted putsch being only two examples. Our advice, take courage from the heroes of Ukraine. They have already defeated Putin and soon enough, the Russian people will complete the job.

Who has courage in Madison?

Madison WI
View all posts by David Blaska →
This entry was posted in Ukraine. Bookmark the permalink.