West High School Principal Karen Boran apologized on behalf of West High School for an e-mail to parents that segregated white Zoom sessions from one for persons of color.

“This message did not convey our intention in a manner that supports our core values,” she said. “Our wording in the communication we sent lacked clarity.”

Blaska Policy Werkes was the first to report that e-mail, sent in the wake of a conviction in the killing of George Floyd. 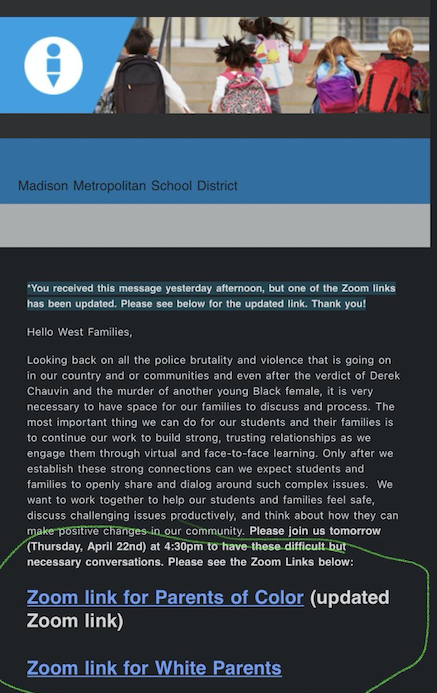 The principal apologized after a demand from the Wisconsin Institute for Law & Liberty. WILL wrote:

Madison West’s justifications for racial segregation are indistinguishable from the segregationists of the 1950s. In that July 2020 e-mail, Madison West justified separation of the participants by race because it supposedly provided a “level of emotional safety and security,” space for students and staff to “process the pain our community is feeling,” and an opportunity to “develop individual and group plans of action to make our physical and virtual spaces safe.”

These arguments are no different from those advanced by the proponents of Jim Crow.

Boran said a diverse team of West staff members created the two Zoom links, one for parents of color and one for white parents of students of color, at the request of students, families, and staff of color after discussions where they expressed frustration having to justify their experiences and perspectives.

Blaska’s Bottom Line: This is where critical race theory is leading America: apartheid.