Brenda Konkel, panjandrum of the far-Left Progressive Dane political party, is up to her old tricks. She is doing her part, from the bureaucratic side, to help the rioters get away with looting and smashing. She wants to doxx police officers who use non-lethal methods of crowd control. 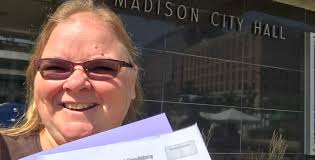 After Monday night’s reprise of riots in Madison, the Werkes thanks God Almighty for pepper spray.

Konkel chairs the Public Safety Review Committee, appointed by her fellow Prog Dane comrade, Recall Mayor Satya 2020. In that role, Madame Brenda formally requested the names of Madison police who wore helmets and riot gear on May 30, May 31 and June 1.

“When I was an alder, I sponsored a resolution requiring numbers on the front and back of the helmet and other gear, so the officers could be readily identified. The police should be able to tell us who was in the riot gear and using force against them.”

MPD responded that no such records exist. Nor should they. Instead, the Department provided a lengthy list of officers on duty those nights in that “all hands on deck” emergency. Here’s Brenda in full snark:

So, if you were pepper sprayed or tear gassed by an officer . . . or shot with a foam bullet . . .or they used their baton against you in the last round of tear gassing, it was one of these officers.

⇒ Hey Brenda, if you were pepper sprayed or shot with a foam bullet, maybe you should surrender to the authorities and quit trashing Madison WI.

Madison WI
View all posts by David Blaska →
This entry was posted in Progressives, War on Police. Bookmark the permalink.