Paranoia, reverse racism, demagoguery: kerfuffle in Lake Mills had it all 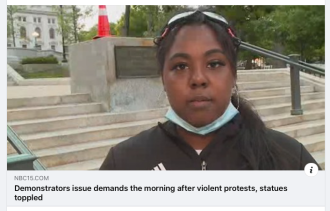 To recap, a woman named Ebony Anderson-Carter led about 40 BLM protestors to camp (without permit) in the park on the village square as one stop in a week-long trek to the Capitol in Madison. She illegally parks her vehicle on the perimeter of the park by backing into an angle parking space, which would require exiting the parking space against traffic. Which she did, colliding with a driver exercising the right of way.

Although small in scale, like Lake Mills itself, the incident shares key similarities with the BLM “protests” in Madison WI, Seattle, and elsewhere.

1. Paranoia: Ebony Anderson-Carter alleges the motorist hit her on purpose!

3. Pure, naked racism: Because the motorist was white.

4. Refusing to take responsibility: Even though (police cam video of the accident) proved Anderson-Carter was in the wrong.

6. Playing the victim: “She said she needed medical assistance said an officer drew a gun.”

7. Lying: Neither allegation was true. “Just about everything she said was a lie and it was made to incite people,” the Lake Mills police chief told the local news outlet.

8. Physical intimidation: According to the Lake Mills Leader: The organizer whose car was damaged posted pictures of the woman and her license plate on her Facebook page.  The woman whose car was hit is heard telling officers she felt intimidated when her car was surrounded by protestors who were taking videos and photos of the interaction.

10. Vigilantism: “It’s implied they are going to do something to her.”

11. Stoking racial resentment: Even in Lake Mills, gullible guilties chose to believe the worst of their neighbors. Somehow, they manage to get elected to local office, as did Rachael Marie Davies to the local school board. (A screen shot of her social media post is reproduced below.) 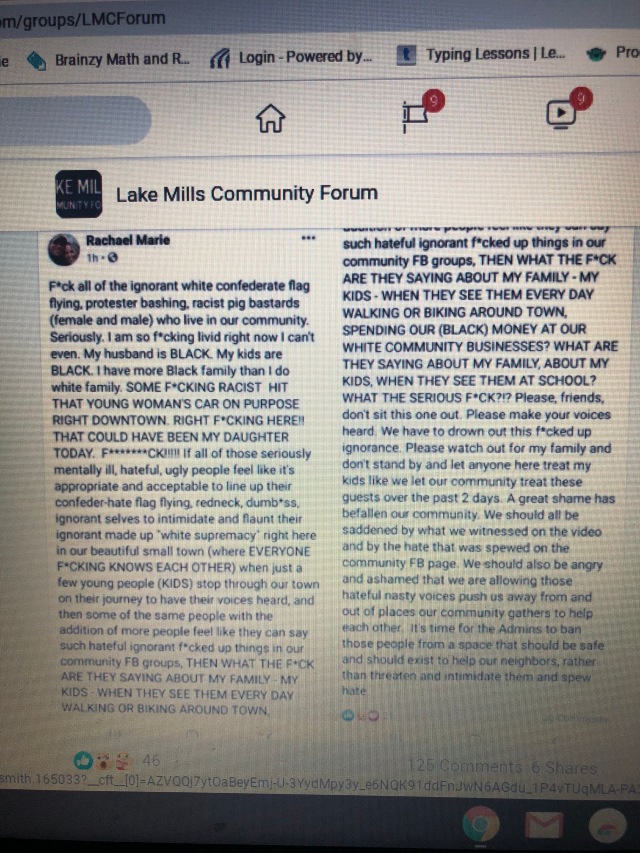 “We have people in the community who have bought into the narrative,” Chief Selck said. “This has blown up the Lake Mills Community Network and the Racial Justice Facebook page.”

12. Indiscriminate use of the F-bomb. (As evidenced by the social media post of the Lake Mills school board’s vice president, shown above.)

Blaska’s Bottom Line: The only elements missing from this toxic stew are significant property damage and physical injury, although one “We Back the Badge” yard sign was taken.

Did we miss anything?

48 Responses to Paranoia, reverse racism, demagoguery: kerfuffle in Lake Mills had it all