Next shoe to drop (or knee to bend):
Colin Kaepernick to start for the Packers!

America is taking a knee. Police Chief Vic Wahl and Sheriff Dave Mahoney knelt Wednesday, June 3, 2020 before Madison’s racial-industrial complex. Forgive us father, for we have sinned. It’s not just those four police in Minneapolis, Minnesota (no change of venue is going to keep them out of prison). Nor is it the occasional bad apples among the 800,000 law enforcement officers nationwide.

Law enforcement as a class  kneels guilty as charged of rounding up people of color so that we can fill our prisons. Breaking up families by arresting dutiful fathers for nothing more than spitting on the sidewalk. That’s the message being sent. 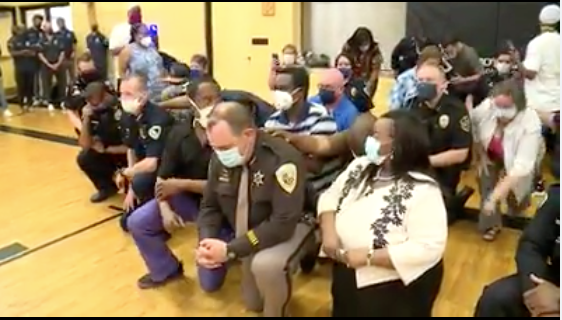 It’s one thing to take a moment of silence, even on a knee, to remember the dear departed. But this bit of virtue signaling is a buy-in to the Colin Kaepernick school of endemic white guilt — a blood libel, particularly, on law enforcement which (the Marxists lecture) are nothing more than modern-day slave catchers.

Abject debasement and self-flaggelation is good politics in progressive Madison. The first brick has yet to be laid for the sheriff’s newer, smaller, more humane jail. The county board could still yield to the Derail the Jail crowd — they’re the same people running the George Floyd protests. Mahoney may need to order more GPS ankle bracelets. That’s IF District Attorney Ismael Ozanne even brings prosecution. 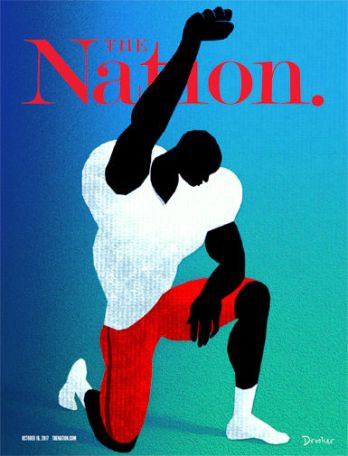 Madison is searching for a superintendent of public schools. Freedom Inc.’s Bianca Gomez could be in the running. (Here’s betting that police will be expelled from the four public high schools at the next opportunity, even though all four are minorities.) Interim Chief Wahl says he does not want the permanent job (and who could blame him?). Madison may choose a chief that makes David Couper look like Bull Connor.

If it’s knees we’re going to be taking, may we suggest remembering the 135 law enforcement officers killed in the line of duty last year, nationwide? How about David Patrick Underwood, the federal law enforcement agent killed protecting the federal courthouse during the George Floyd riots in Oakland CA? He’s African-American, too. Or the 50 people (mostly minorities) shot in Chicago over Memorial Day weekend? The next day, another 28 were shot, including a 5-year-old girl standing with her family? None of them by police. 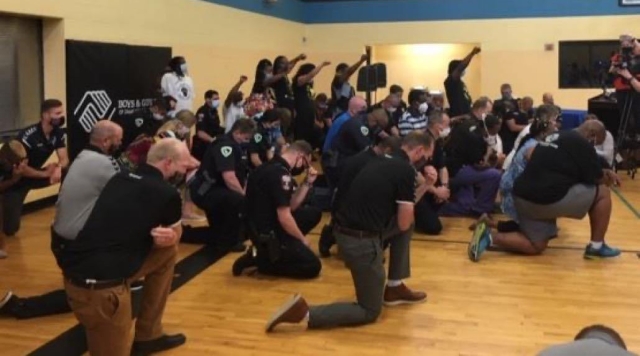 Some knelt, others raised fists in Madison

Go ahead, apologize for the legacy of slavery, although Wisconsin bled to free the slaves and was an important cog on the Underground Railroad to freedom. We’re sorry about the disparity in school graduation rates; must not blame kids for roaming the hallways instead of attending classes taught by those (apparently) racist Madison teachers — all dues-paying labor union members.

Blaska’s Bottom Line: It would seem disempowering to play the victim of the white supremacist power structure in a city operated by progressive Democrats the last 50 years. Where the district attorney, two judges, the city council president, a state legislator, and four of seven school board members are minority race. But the liberal-progressive-socialist enterprise teaches victimhood and there’s something about reaping what was sown.

What are YOU apologizing for today?

28 Responses to Take a knee, America