Get off my lawn!

Merchants on Madison WI’s State Street learned that their pitiful signs of support for racial justice didn’t prevent their windows from being smashed and their stores looted. Same principle for Sheriff David Mahoney.

In conjunction with other community leaders, Sheriff Mahoney denounced the actions of those four Minneapolis police in the death of George Floyd.

Back in 2011, Dane County’s sheriff objected to acting as Scott Walker’s “palace guard” when tens of thousands of angry protestors stormed the Capitol during the Act 10 intifada. A year ago, Mahoney endorsed Madison Cops Out of School/Derail the Jail candidates.

David Mahoney is a good sheriff but a partisan Democrat who goes along with Dane County’s progressive idiocy in order to get along.

What was Sheriff Mahoney’s reward for being sufficiently “woke”? The social justice warriors stormed his home Tuesday — his private residence, where he lives with his family —  to pretty it up with their anti-cop doggerel. Those included demands that all black jail inmates be released forthwith. At least they did not vandalize his house. But it is trespassing.

No amount of groveling

Because no matter how hard Dave Mahoney tries, he remains a cop, the enemy of the Left and their fellow travelers in public office. And white.

⇒ THIS JUST IN: Sheriff Mahoney and Madison Police Chief Vic Wahl announced they were to kneel with the protesters this afternoon. (Snark alert! That should do the trick!)

The little visit to Mahoney’s private home was part of Tuesday’s illegal traffic slowdown on the Beltline Highway — organized by Freedom Inc., Urban Triage, and the communist Party for Socialism & Liberation. On May 31, the three entities issued a statement condoning Madison’s nightly riots, which read in part:

Our organizations will not denounce any Black person’s display of grief and/or rage. All actions against racist state violence are justified and we will not minimize these contributions to liberation.

Who is this Assata Shakur? She is a member of the Black Liberation Army who was charged with a plethora of felonies and ultimately convicted of the first-degree murder of a New Jersey state trooper during a shootout in 1973. She escaped from prison in 1979 and was granted political asylum in Castro’s Cuba in 1984. The FBI lists her as one of its Most Wanted Terrorists as Joanne Deborah Chesimard. 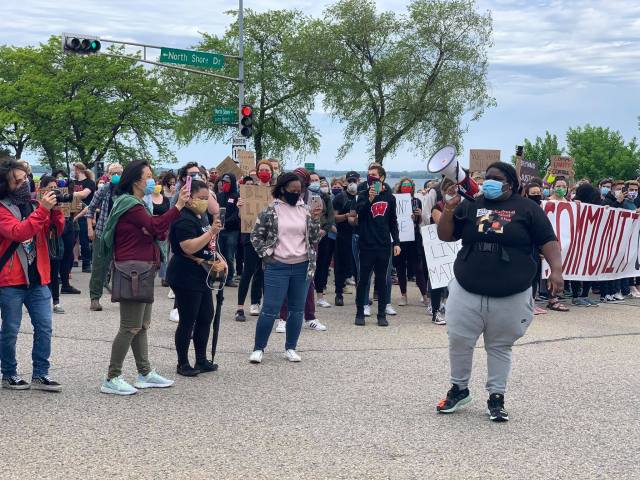 Today on the barricades

•   Freedom Inc. is on-line at 6 p.m. today to explain how they will defund the police at facebook.com/aboutfreedominc

An addendum: Ann of Althouse picked up this post and that generated a comment from one of her followers that was implicit  but needs to be expressed:

It’s a message. It says “We know where you live and you can’t stop us. This time flowers. Next time gunfire and molotov cocktails.”  That’s the message to the sheriff.

Madison WI
View all posts by David Blaska →
This entry was posted in George Floyd riots, Uncategorized. Bookmark the permalink.