The people are reopening America, not the government.

The white lab coats here at the Policy Werkes have identified five traits shared by our liberal-progressive-socialist acquaintances, illuminated by the waning (not that Rachel Maddow would admit it) coronavirus pandemic.

Rule by expert is the concrete foundation of Progressivism. Which is why they utter idiocies like, “Education, the Environment,  _________ (fill in the blank) is too important to be left to the politicians. We must listen to the experts.” Voters be damned.

So they condemn Trump for not wearing full surgical garb. Result is  this bizarre headline from CNN:

“Trump’s plan to win a second term unmasked: the President gave every impression of battling for his political life during a visit to Michigan.”

CNN gives every impression of desperation. The head groundskeeper at the Policy Werkes is old enough to remember when the experts said face masks cause more harm than good.

… and Epstein didn’t kill himself

Wisconsin Gov. Tony Evers is a hero for trying to shutdown the state for another couple of years because the virus is still out there. Our progressive acquaintances (for they ARE our …) want that to shut down businesses employing a thousand workers if just one pico-curie of contamination is detected. Award millions in civil tort damages to the idiot who spilled hot coffee on her lap.

Too many of our liberal-et cetera acquaintances seem to think that “flattening the curve” means erasing the graph entirely. When its purpose was more modest: don’t overwhelm the hospitals so that people die on gurneys in hallways. National Review editor Rich Lowry writing for the indispensable (that word again) New York Post:

We are on the other side of the curve. There are encouraging signs all over the country — and no early indications of a reopening debacle. The question now is whether the media and political system can absorb good news on the ­virus, which is often ignored, if it isn’t buried under misleading storylines.

Because the purpose is to defeat Trump. Now Rachel Maddow & Co. are upping the ante. Our Chicken Littles won’t be satisfied until every human and their dog gets vaccinated. Also called “moving the goal post.”

It’s the Rahm Emanuel rule. More rationale for another Great Society big bad New Deal. The pandemic, then, is a godsend (as if God really existed). Because government is the answer! (Except when it’s Donald Trump.)

But Trump didn’t order people sickened from a strange new disease to be housed with vulnerable elderly folks in nursing homes, like Andrew Cuomo in New York and Minnesota’s Gov. Walz. As the Minneapolis Star-Tribune reported:

Trait #4: Everyone is a victim

Everyone, they believe, is a victim in need of the tender ministrations of Big Gummint. They’ve long laid claim to racial minorities, who won’t be healed until America pays reparations for past misdeeds, abolishes academic testing, and empties prisons. #MeToo, ladies (except you, Tara). Students at publicly subsidized universities are victims, somehow.

Now even the cisgendered white male can join the sisterhood of victimization, thanks to novel coronavirus. And if they’re not victims today, they are (at least) potential victims!

“As states lift their lockdowns, businesses are trying to reopen,” the Wall Street Journal observes. But Pelosi’s Democrats forced through higher unemployment benefits. Now many employers …

… are struggling to rehire workers because they can’t compete with enhanced jobless benefits. 38.6 million have applied for unemployment insurance in the last nine weeks. [But] 68% of laid-off workers are now making more unemployed. 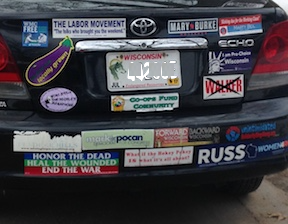 Not enough to be “good.” Your neighbors must KNOW you’re good. The ubiquitous bumper stickers demanding COEXIST! (Serenity Now!) The yard signs that Believe in Science and welcome everyone as neighbors, in Spanish and Hmong. Now, the face mask — as good as a McGovern button.

⇒ Observation: Went to Jung’s garden store on Nesbit Road and everyone was wearing a mask. Next stop at the Harley Davidson dealer. No one wore a mask. Two Americas.

Blaska’s Bottom Line: Instead of spinning our own cotton, as in Gandhi’s India, colossus America is making face masks. (Surely, the Smithsonian one day will stage a showing.) And liberals are wearing them bicycling toute seule through the UW Arboretum. Anyone who doesn’t is SELFISH!

How selfish are YOU today?