We shop so we don’t drop from the Coronavirus

By the Lovely Lisa 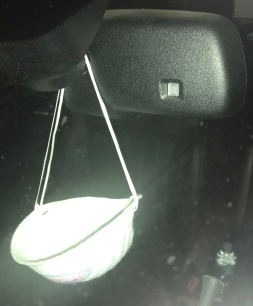 It hung there like a talisman similar to a rosary or crystal. Or the green tree issuing a pine scent. From the rear view mirror my husband had placed a mask — a 3M product from his workshop. I was to take it into any store and wear it when I coughed.

I don’t have the corona virus. I do have a lingering occasional cough that results in much throat clearing. The wearing of the mask was not intended to protect anyone — me included — from contagion. It was to protect the emotions of those who might hear/see me cough. A nice idea, that. And I had had the thought of how others might feel if they heard me cough.

I did not wear the mask, however. 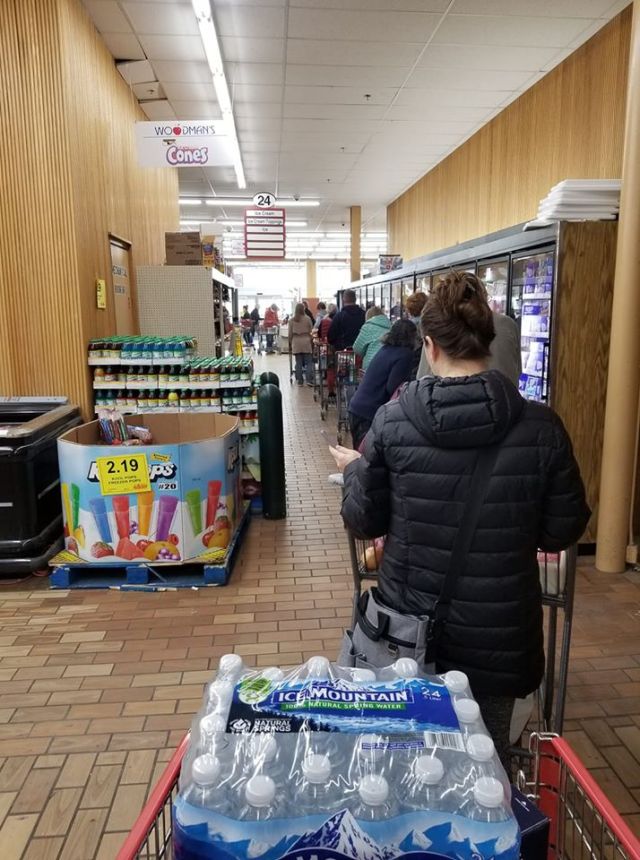 Friday the 13th, an auspicious date if there ever was one, I went to the grocery store. Actually three of them. I had just read in the morning Wall Street Journal that French president Macron is suggesting that all people over age 70 stay at home. Being 71 ½,it did give me pause before I turned the page. I also have one of those under lying health problems, asthma, that is so often mentioned connecting older folks with those who don’t fair so well with Covid-19.

But I needed to get some shopping done. Granted some was over purchasing few items — like coffee and fresh vegetables. Also there were the “deals” that were only offered this Friday or Saturday. So. I girded my loins and braved the populace.

I knew that there was trouble when I couldn’t find a parking spot at Woodmans. It’s a large store with a large parking lot — five aisles deep. But folks were having to go into the liquor store lot next door.

I did find a cart and a disinfective wipe. I decided to keep a driving glove on my right hand to pick up items and for pushing the buttons on the debit card machine. I was not surprised to see that other shoppers were doing the same.

Planning for a siege

Carts were piled high. Seems like people were planning for a siege — that they wouldn’t be able to get out to shop for a very long time or that there would be shortages and the shelves would look like Venezuela. Besides toilet paper, bleach was disappearing. Along with the Dawn I needed. Empty shelves. And I was running low.

There was one display with a sign instructing shoppers that they would be limited to only two bottles of rubbing alcohol. Also on display in the magazine racks near the checkout was the National Enquirer proclaiming that a cure had been found for the coronavirus.

My cart was ready with the usual groceries, plus extra decaf, two bags of spinach and one more bottle of tonic. It was an ordinary shopping amount. I did feel sorry for those folks who normally come on Friday morning to do their weekly shopping. What a zoo. Time to check out.

I had noticed that the lines were extending deeper into the aisles, even though more cashiers had been added — that’s store preparation — but there were at least a dozen carts in front of me. And I was in an aisle holding power drinks and bars. Nothing to interest me as I waited for over half an hour to finally get my groceries bagged and press my debit password numbers with my gloved finger.

My second store was the Pick ’n Save which is located in a UW-Madison housing area. Parking lot crowed, but no wipe at the door. Each checkout station did have a pump of sanitizer, though.The potato, onion and meat shelves were near empty. This was the only store where I saw people wearing masks. They were all Asian. I reminded me of the pictures showed in the news of people in China and Japan ALL wearing face masks. And this was before this current pandemic.

At the HyVee store I had to park farther away than usual. The OJ was running low, but it WAS on sale — one reason for my being there. The trout was gone so I got catfish. Standing in the checkout line with only two non-overflowing carts in front of me,

I heard a sneeze. It was not a muffled, in-the-elbow sounding sneeze.

I tried to gauge how far away it was and to remember just how far those little droplets can travel anyway. Estimating I was about 20 feet distant from the sneezer, I figured I was OK. But just goes to show how quickly our mind turns to survival thinking.

Which, I guess, is what all this shopping madness was all about.

Did YOU stock up?