‘Whatever we have to do; and
we’re not going to necessarily play fair.’
— Democrat(ic) party insider on MSNBC

Didn’t some communist write a folk song that went something like this:

Blaska is just the man for the job, given that the original gonzo reporter is no longer alive to chronicle the Fear and Loathing on the American Left. We demand combat pay. Cornered rats (in one more reference to Baltimore) are the most dangerous.

Our liberal-progressive-socialist acquaintances are starting to scare the unlettered field hands here at Blaska Experimental Work Farm — so simple and trusting, their souls. Seems they’ve gone especially virulent since the flop of the Mueller show. (Where is Quentin Tarantino when you need him?)

The creaky Eisenhower-era mainframe computer out in the garden shed has begun its doomsday countdown, so many hundred thousand minutes until 4 November 2020. That is the day after the next Presidential election. Which is to say, Armageddon. (As in, “arm a’ geddon outta here.”)

Hatches will be battened here at the Stately Manor. Perimeters secured.

Not that this 2016 never-Trumper is in particular distress over 45’s re-election as much as his anxiety over the unhinged Left’s reaction to same. The technical terms is “Trump Derangement Syndrome (TDS).” 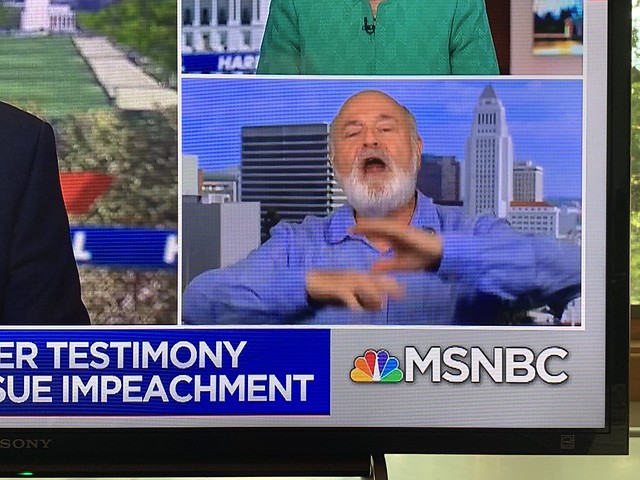 Meathead goes off his meds

Many of our … acquaintances are becoming balmier than that aunt in the attic. They are going all A.O.C. over plastic straws, farting cows, manhole covers, Depression-era murals, and the good ol’ days of forced school busing. (The 1970s called, your lime-green leisure suits are ready at the cleaners.) Soliciting convicted felons to serve on police review committees. Pouring buckets of water on police. Bending and blending genders. Open borders and more free stuff. Reparations.

No chocolate or high heels in the Brave New World

After I interviewed Nancy Pelosi a few weeks ago, The HuffPost huffed that we were Dreaded Elites because we were eating chocolates and — horror of horrors — the speaker had on some good pumps.

Yo, proletariat: If the Democratic Party is going to be against chocolate, high heels, parties and fun, you’ve lost me. And I’ve got some bad news for you about 2020.

The progressives are the modern Puritans. … They eviscerate their natural allies for not being pure enough …

An especially “woke” soul named Marty Beth Collins, director of the UW Center for Community and Nonprofit Studies, proposes that Trump syndrome sufferers bang pots and pans promptly at 8 p.m. every day until the bad orange man goes away. (Who says there is no diversity of thought at UW-Madison? Or that a college education does not guarantee useful skills?)

I am saying NO to the President calling Baltimore “a disgusting, rodent, rat-infested district.” These are not the words of a legitimate leader. … We must disrupt the peace every day, 8 p.m. every night.  … Post and share photos and about why you are banging on all your social media outlets. Repeat daily.

What is needed is some stupid, futile gesture

Sophisticated surveillance equipment here at the Werkes detected no pots a-banging but if it does, the Squire will light up his Harley Davidson softail slim and let that 107 V-Twin play its own music.

Eccentric, we can live with. It’s Antifa-angry that threatens the republic. The Trump Resistance is going all Robespierre, Peggy Noonan observes. “The French Revolution was led by sociopaths who politicized language, much like today’s Jacobins.”

The French Revolution … was more a nationwide psychotic break than a revolt — a great nation at its own throat, swept by a spirit not only of regicide but suicide.

Anne of Althouse posted the picture of The Meathead  fulminating on MSNBC. It cannot be long before he has his own time slot. Anyone remember Eric Severeid? MSNBC contributor and Democratic National Committee advisor Donny Deutsch on Friday:

“We may not have won the battle of impeachment, but we’re going to win the war of putting him in jail. Whatever we have to do. And we’re not going to necessarily play fair.

WHAT DO YOU THINK?