The head groundskeeper at the Werkes met Darwin Ness when Blaska left The Capital Times for the Wisconsin Department of Health and Social Services, as it was known in 1990. Patricia Goodrich was secretary under Gov. Tommy Thompson. Mr. Ness was wheelchair-bound, could not speak but he could understand — a fact not appreciated for almost 50years. The man communicated via an early and simplistic laptop device. The women in the office loved the guy.

So it was startling to read today that this gentleman survived until this 22 January 2021 and that he remained at the Secretary’s office at 1 W. Wilson St., Madison, until the coronavirus pandemic mostly emptied office buildings early last year. He died at age 90.

His inspiring story is heart breaking and life affirming. We excerpt from the paid obituary.

He was born May 31, 1930 … on a farm near DeForest WI. … He had cerebral palsy and never walked or talked. He was intelligent, had a deep intuition, understood everything he heard, and communicated in many ways.

Darwin … spent his first eight years with his family, and later in life referred to many activities he had enjoyed on the farm. He had a close, loving relationship with his mother, who imbued him with an abiding sense of self-worth and optimism about life’s possibilities. Darwin remembered his mother each day of his life and had the patience of a strong faith that they would eventually be reunited. 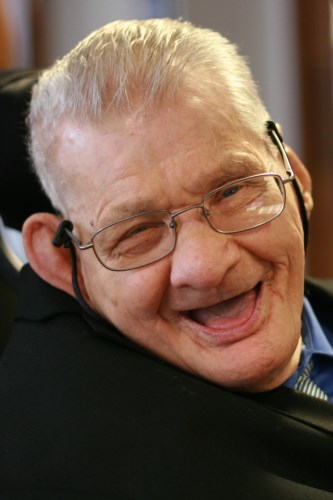 This foundation would help Darwin survive the next, difficult chapter in his life.

At age 8, on the advice of doctors and others, he was placed in Northern Wisconsin Center, at the time known as Northern Colony, an institution that housed people with disabilities.

He would live there for an inconceivable 47 years, losing all contact with his family.

In an era when the understanding of disabilities was prejudiced and limited, and when institutions were under-financed, Darwin would endure a life of deprivation, neglect, and abuse.

Years and years with no contact with anyone outside of the institution, no access to a wheelchair, and prolonged periods of not even being assisted to get out of bed. He survived through the friendship of fellow residents and of some kind staff, and through his self-confidence and strong belief that something awaited him beyond the institution. …

In 1985, Wisconsin began a program to allow people who were institutionalized to move to the community. Darwin was among the first to qualify. While visiting Northern Center to implement this program, staff from Dane County Human Services met Darwin.

Darwin introduced himself by moving his wheelchair toward the exit door, pointing to himself and the door, and letting everyone know he wanted out!

Options in Community Living … helped Darwin establish a new, self-determined life in his own apartment in Madison. Once Darwin was comfortably settled in Madison, his goal was to make up for lost time!  Community Work Services, a vocational support organization for people with disabilities, helped find the perfect job for Darwin as a clerk at the Wisconsin Department of Health Services.

He worked in the Secretary’s office for 35 years, retiring at age 89 only due to the pandemic. He loved to work and made many friends and received awards from both Governors Thompson and Doyle for his contributions.

Darwin Ness co-founded an advocacy group to free disabled people from the warehouses. Mr. Ness married, was an active church member — even rode horses, took up arts and crafts, and even went dog-sledding.

The Darwin Ness Bottom Line: “Darwin was a devoted son, a survivor, an inspiration to thousands! To know Darwin was to love Darwin. He will be sorely missed. His story and his legacy will live on.” Honor his memory by contributing to Options in Community Living.

How much sun are WE shining today?

Madison WI
View all posts by David Blaska →
This entry was posted in Uncategorized and tagged cerebral palsy, disability. Bookmark the permalink.

3 Responses to An heroic life of unspoken, simple goodness