Anything to elect more Democrats!

The Wisconsin State Journal accepts as immutable fact that Wisconsin’s legislative districts are gerrymandered. This assertion is not confined to the opinion pages but appears as standard boilerplate in the midst of supposedly objective “news” stories.

The Werkes points out that the State Assembly that drew these supposedly crooked maps after the last Census numbered 60 Republicans, 38 Democrats and one independent. Inconveniently for the “we wiz robbed” conspiracists, that legislature was elected from districts drawn by a federal judge!

⇒ After the first election on the new and supposedly gerrymandered map in 2012, Democrats actually picked up a seat, making the party divide 60-39 Republican.

Editorial page editor Scott Milfred, a good and honest journalist, parried that the Werkes was cherry picking the data, that we started our clock for comparison immediately after the tea party wave of 2010. That in 2008, The Assembly was a 52-46-1 Democrat majority. “So of course the Republicans had a large majority after the 2010 election” (elected before the 2010 Census results were known).

But that makes our point! Which is that political allegiances DO shift! And do so regardless of district boundaries.

⇒ The west side of Madison was once represented in the 1950s by Republican Carroll Metzner and into the 1960s by Robert O. Uehling. On November 3, Republicans lost two Assembly seats in once bright-red Mequon and Brookfield. 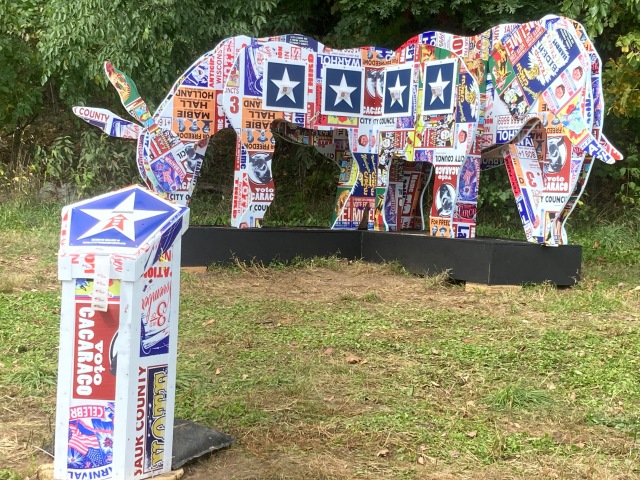 Could Madison spare some Democrats?

Our favorite Madison-based daily newspaper went up Sunday 11-15-20 with a thumb-sucker by Fred (“Smooth as Silk”) Kessler. The former Democrat(ic) legislator is hellbent on making Wisconsin elections more “competitive” and damn the consequences. The State Journal promotes Iowa’s supposedly “non-partisan” redistricting panels. (The New York Times would tell you that it is “non-partisan.”) In any event, Ballotpedia reports that computer-generated redistricting in the Iowa House of Representatives resulted in 2 fewer competitive elections!

To his credit, Kessler will have none of non-partisan. He would go whole-hog partisan.

My proposal requires using the data about how people in specific districts have voted over the past four or five presidential or gubernatorial elections. It also would allow for disregarding some municipal and county lines and some communities of interest.

In other words, he’d cut across your front lawn if it meant capturing a Democrat in a politically divided family. Right away, Kessler violates established court guidelines on community of interests. In Baldus v. GAB 2012, the state supreme court dismissed the primacy of partisanship over communities of interest:

It is important not to assume that the mere ability to elect a representative of one’s preferred political party is a perfect substitute for the ability to elect a representative who will more broadly identify with and serve his or her constituents’ needs. The two major political parties are both big tents that contain within them people of significantly different viewpoints. 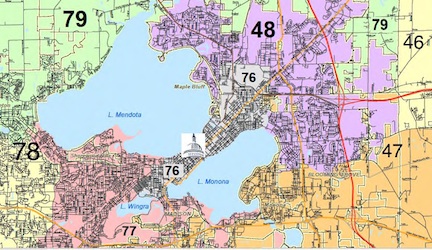 In any event, in a geographic-based, district system, how does one make (for instance) the 76th Assembly district on Madison’s isthmus competitive when it is surrounded by districts similarly dominated by Democrats? The Democrat in that downtown Madison district took 88% of the vote November 3 in an open seat. Democrats in two Madison Assembly districts and in one open state senate seat were unopposed.

Look at the map; each and every one of Madison’s districts are overwhelmingly Democrat. To make the 76th competitive, one would have to draw a district that ran along the median strip of U.S. Highway 151 all the way to Beaver Dam to pick up enough Republicans.

Madison WI
View all posts by David Blaska →
This entry was posted in Uncategorized and tagged Gerrymandering. Bookmark the permalink.