‘Do whatever you want’

The BLM/Antifa/Resistance has a new hero — one Jacob S. Blake. Reportedly shot seven times In The Back. Not good! But still surviving, as of this writing. Then again, when can we learn two important lessons: 1) Do not resist arrest. 2) Do not commit crime. If it is the same guy, he had been charged with felonious sexual assault and multiple domestic abuses. When he was shot, he’s trying to get back into his vehicle. Might there be a gun inside?

Q. Is it too much to ask that folks restrain from looting the $200 gym shoes until the facts are out? 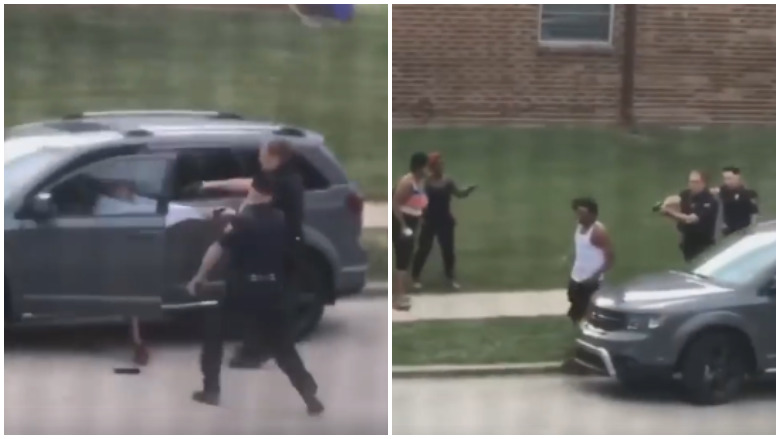 Violent riots and widespread looting broke out in Kenosha, Wisconsin, late on Sunday night after a black man was shot by law enforcement officials who were responding to a call about a domestic incident.

RightWisconsin is asking some serious questions

Two screenshots raise questions about what Blake had in his right hand while walking away and of a possible object that fell from the car as Blake was shot.

Jake Blake has an extremely disturbing banner on his Facebook page depicting police officers in a squad with pig and demon faces. He also had an open warrant.

A previous gun incident involving a Jacob Blake of the same age bears similarities, as the man resisted and a K-9 was needed to get control. … It is very possible that these officers saved their own lives or the lives of others. It is also possible that what we saw was a murder. We must, however, wait for the facts before we draw any conclusion. — RightWisconsin here.

1 a.m. this morning 08-24-2020 — The 911 center received multiple calls of shots being fired in the 4500 block of Stein Ave.  Once on scene, officers found shell casings in the roadway, including rifle rounds.  Officers located two residences and two vehicles that had been struck by gunfire.  In total, officers found at least 12 bullet holes in the homes/vehicles.  Both residences were occupied, with rounds striking close to sleeping residents, but no one was injured.  The investigation is on-going at this time.

3:30 a.m. Sunday 08-23-2020 — Multiple callers reported hearing gunfire just before 4 AM in the area of W Olin Ave and Gilson St.  Officers recovered 4 shell casings in the roadway.  There have been no immediate reports of injuries or property damage.

23 Responses to ‘Do whatever you want’