‘Don’t just do something! Stand there!’ — Ronald Reagan

But do so six feet away, please

We called our restaurant on Parmenter Street in Middleton Tuesday asking if it would be open for our bi-weekly breakfast of wise old guys (not old wise guys). The co-owner sounded delighted to have our business — any business. Later that day, Gov. Evers closed her place — and all restaurants and taverns in Wisconsin. — It’s a small restaurant, not a chain nor a franchise. We hope she and her sister make it. Big tips next we meet there.

Did Andrew Yang win after all? When did Mitt Romney take charge of Republican policy? How did Barack Obama burrow back into the White House? Is Bernie now commissar of the treasury?

The securities collapse of the past few weeks may have felt like a market apocalypse but the lesson of past downturns is that it could get a whole lot worse. … … A recession now looks inevitable.  — “Streetwise” in the Wall Street Journal 03-18-2020. 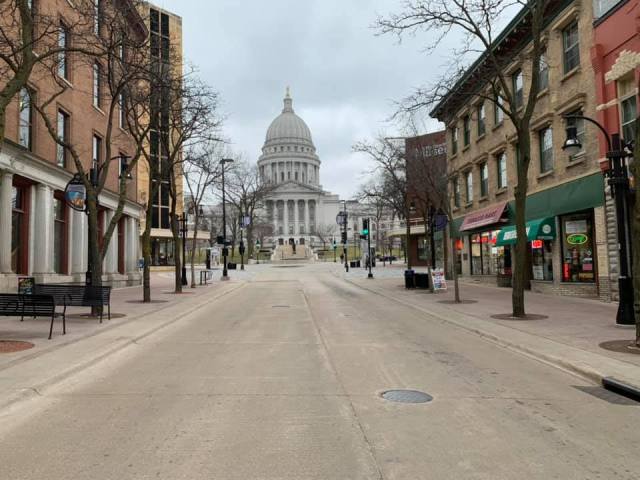 Industry bailouts, low-interest loans, expanded unemployment bennies, mandated sick leave, tax holidays — even direct cash payments. STAT! Trump’s treasury secretary seems poised to send Blaska Policy Werkes a check for $1,000 as part of a One Trillion–dollar relief package. Why? Our drive-through window remains open as always: from 3 to 3:15 p.m. the fourth Thursday of every month. Our blogge numbers are way up. No, we will not return the check. We’ll plow it into stocks held by our Roll-over IRA as soon as it arrives, while they’re still cheap.

We will survive the coronavirus panic as Americans adapt, as they always do. We’re less confident of the Washington panic, as our politicians rush to throw money around without much thought or economic logic as they almost always do. — Wall Street Journal.

The Big Gummint goo-goos are elated

“The era of small government is over,” exults one headline in the New York Times. As with liberals, progressives, and socialists everywhere, the Billions with a B in fresh expenditures from government printing presses is/are not enough.

“Even the most ambitious proposals are nowhere near powerful enough to actually stop the coronavirus from destroying the economy. To do that, policymakers have to go beyond stimulus or bailouts for select industries. … They have to take responsibility for economic life on a scale not seen since the New Deal,” the NY Times urges.

All those coronavirus fighters jammed up on the stage. Social distancing, anyone? BTW: Is Dr. Fauci the Man of the Year so far?

Holman W. Jenkins Jr. of the (indispensable) Wall Street Journal taps the brakes on the pell mell rush to spend:

We’ll be spending a lot more than we’ve ever been willing to spend before to avoid flu deaths. 83% of our economy will be suppressed to relieve pressure on the 17% represented by health care. … Wouldn’t it make more sense to pour resources into isolating the vulnerable rather than isolating everyone?

Jenkins adds, “… Testing becomes a tad mootish now if the goal is to isolate even young and healthy people.” A tad mootish!

The camel’s nose is under the tent

Following Rahm Emmanuel’s dictate about never letting a crisis go to waste, Elizabeth Warren would attach all kinds of strings to any aid; among them, force recipients to adopt a $15 minimum wage, bring worker representatives onto corporate boards, and end share buybacks, among other requirements. (Can Pelosi be far behind with abortion on the taxpayers’ dime?)

(Under the evocative headline “What is to be done” along with the requisite photo of Lenin, The Nation magazine demands the nationalization of major industries.)

“But none of this is actually enough,” the Times communist/columnist concludes. It never is.

Madison WI
View all posts by David Blaska →
This entry was posted in Coronavirus. Bookmark the permalink.