After his decisive but not unexpected defeat for Madison school board, the Policy Werkes prescribed some two-wheeled therapy for its proprietor, David Blaska.

Wisconsin weather being as fickle as Madison voters, Blaska retreated to the Werkes’ west coast offices in sunny California during the second week of April. Brother Richard and wife Margaret have homes in San Francisco and Sonoma and were gracious enough to put up with this old coot, who expresses his thanks.

The Old Guy rented a bike through Eagle Rider, a national chain featuring several makes of motorcycles. They have an outlet on San Francisco’s busy Mission Street attached to the local Harley Davidson dealer. 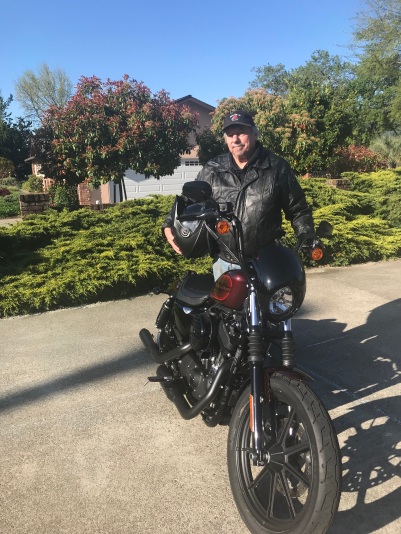 For Sonoma County’s mountain and valley twisties, a Harley Davidson Sportster seemed about the right speed, as opposed to a big touring bike, which you might want on the Interstate or the wide-open spaces. No need for cruise control on these roads!

Truth be told, I expected to encounter a beater on the floor of the Mission Street dealer in San Francisco. Instead, a brand new Sportster 1200 Iron awaited me with all of 17 miles on the clock. This model is a beauty pageant winner; black dual exhaust, blacked out primary case and fins highlighted by stainless steel bolts. Tank and fenders are what HD calls “twisted cherry” red. Mini-high rise handlebars and a small cowl around the headlight completed the picture on this one-up stunner.

I had this baby for five days at $139 a day plus another $35 per day for theft and damage insurance.

Thank Saint Steven Jobs for his Map app to get me out of SF, although it insists on zig-zagging me through turn after turn in search of the shortest way out, as the crow flies. Navigating SF’s vertiginous hills demanded coordination between left-hand clutch and right-hand braking while working the gears.

This was my first extensive use of a full-face helmet, which you got to have if riding without a windshield. Had purchased a Scorpion (brand) helmet with a built-in sun visor. Compares favorably to a much more expensive Schuberth and, at $260, about a third of the cost. Had a wireless Cardo wifi installed into the helmet. Helmets are mandatory in California.

There is no better bucket list than crossing the Golden Gate bridge on a Harley Davidson. It is an experience the word “exhilarating” was invented to describe.

Set up shop at brother Richard’s hacienda north of the village of Sonoma; it borders the BR Cohn vineyards. Never did dip in the pool but did dip into his wine fridge. As is our custom, we left youngest brother and his spouse with more vintage than we found.

The hills were green as they usually are in spring. They’ll turn brown by fall. All but the oldest-growth vines were springing to life. Workers ran tillers between the staked rows, some of which climbed up the foothills of the low Mayacamas mountains that separate Sonoma County from Napa to the east.

Sonoma was briefly the capital of newly independent Alta California, the town square (the largest in California) still flies the Bear flag from the revolt for independence from Mexico in 1846. The 1832 mission was the final and northernmost established by the padres and the only one under Mexican (rather than Spanish) rule. The barracks next door reflects the Mexican government’s nervousness over the advance of the Russian bear southward to Fort Ross (for Rossiya) on the coast.

An oddity: A transplanted Wisconsinite started California’s commercial wine industry. Count Agoston Haraszthy left Hungary to found the Wollersheim winery on the other side of the river from Prairie du Sac, then pulled up stakes (so to speak) to establish Buena Vista winery in Sonoma in 1857. 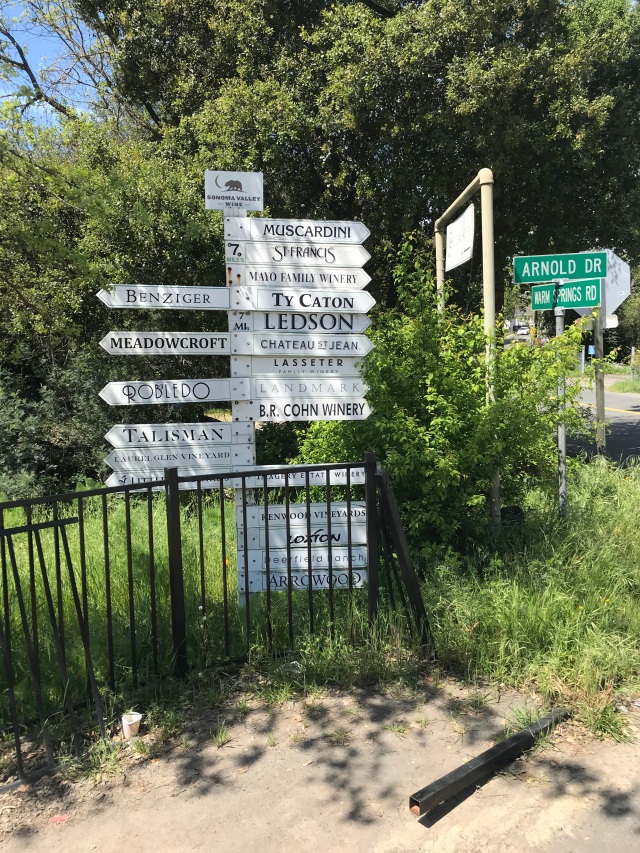 Sebastiani, Kenwood, Kunde, and Ravenswood (famed for their zinfandels) are other big names here. We stopped at a smaller, more experimental winery, Imagery, located on the Sonoma Trail (the main road running down the spine of Sonoma County). Imagery is an offshoot of our all-time favorite wine stop, the Benziger family winery, which is located just west of the quaint village of Glen Ellen, which hugs the Sonoma River upstream from Sonoma itself. Benziger is next door to novelist Jack London’s ranch, now a state park.

Unlike many of the wineries here with aspirations to French chateau vibe, Benziger’s has a family farm feel, including a fair collection of old tractors.

On a previous visit the Lovely Lisa and her Old Guy drained a bottle of their sauvignon blanc on a modest porch outside the tasting room. I heard clanking and ran to a building to witness a bottling. The vineyard lies within the caldera of an extinct volcano. Benziger actively cultivate gardens to encourage beneficial insects to do the work that pesticides would perform elsewhere.

But many of the wineries here are little known; some vineyards simply sell their juice to the bigger labels.

Back in Glen Ellen, a sign on one of the buildings thanks firefighters for saving the town. We looked but saw no evidence of fire, save for that sign and a couple of others than warned of greater danger for mudslides.

Roads hereabouts are heaven. Everything one could want atop a motorcycle, those being:

1) hills and valleys that exhilarate with the changes in altitude, 2) twisty roads that 3) reveal something new around every curve: a farmstead or vineyard here, forested hills there, next a rushing stream, there a rock cropping; 4) easy pull-offs for picture taking. Better yet, a small village for a quick bite. That usually means county roads rather than state highways.

Only on two wheels can you seemingly flow through the landscape, smell the air like a dog hanging out the window, sway left or right as you bite into a corner, then twist the throttle to pull you through, hear that satisfying BLATT! from the pipes as the air-cooled twins respond, then float down the hill in overdrive as the world unfolds before you.

There is a God and he was good to Blaska in wine country.