Identity politics will be on the ballot next spring

Stopping at the corner of Whitney Way and Odana Road, the Squire had a flashback. (No, not from the orange sunshine back in the day.) Just a year ago, motorists at Madison’s busiest intersections were confronted by professional panhandlers masquerading as “homeless.” Today, Madison’s byways and highways are mercifully free of these pests. 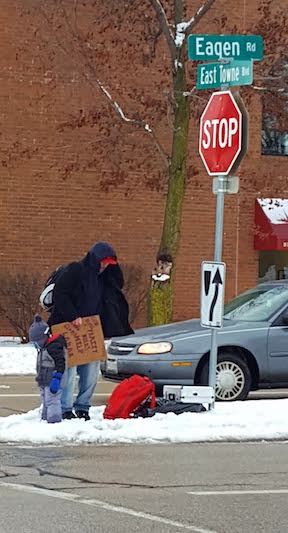 No thanks to Mo Cheeks. Mayor Soglin tried to get the council to ban the practice. After months of hair-pulling and finger-twisting; WI State Journal editorials; “Help Wanted” signs like dandelions in spring; and solid evidence from the police, the streets department, and social service agencies that these beggars were scamming the public AND a traffic hazard, the council voted for the ban. Well, most of them, anyway.

Not Alderman Maurice Cheeks. He voted to keep the scammers scamming for dollars on our busy streets. Now the guy is running for mayor on the Identity Politics ticket. No surprise: We predicted this back in April — April 2017.

When a candidate hires professional Washington D.C. campaign operatives — including Hillary Clinton staffers — for a city aldermanic race you know the guy wants to swim with bigger fish. The incumbent alder spent twice as much for his re-election last year than normal. Isthmus took notice: “Hey, Big Spender,” the liberal weekly taunted, without catching on that the re-election bid was just a tune-up for The Main Chance.

This being the Emerald City, Isthmus got played the race card for even reporting the unusual spending. (Read the comments.)

The race card is Maurice Cheeks’ ace card. He’s counting on Madison’s guilty liberals to cast off the yoke of white privilege, to overcome their implicit bias in order to elect Madison’s first black mayor.

Said so in his announcement today. “I’m … focused on working to reduce racial and economic inequality in our city.”

So he’s a socialist, as well.

• Raid the city’s emergency fund for $400,000 to search for signs of white privilege and implicit bias in Madison’s nationally honored police Department.

• Keep the fake “homeless” scammers on the median strips of our busy streets even after the police, the streets department, and the mayor proved that the scammers were not really homeless.

• Spend $13 million of tax money for something called a “public market.”

• Erase history and remove the memorial monument to the Madison woman who cared for the graves of the Confederate soldiers who died as POWs at Camp Randall.

• “Bridge the digital divide,” spending hundreds of thousands of dollars on a boondoggle that attracted a total of 19 subscribers (discussed here).

Cheeks joins Satya Rhodes Conway as announced candidates for mayor. Now we’re hearing that Brenda Konkel and Bridget Maniaci may join them. All former alders. As for the incumbent, Paul Soglin is sounding tired of fighting the council. Cheeks, in particular, is part of the anti-Soglin cabal on the Council. Perhaps as tit for his tat, Soglin blasted Cheeks for having “a history of poor budget priorities.” (The Capital Times, 9-20-16)

Blaska’s Bottom Line: That should be enough to get Mo Cheeks elected mayor. This IS Madison, after all.