What would Ald. Matt Phair and the Madison Common Council say!

It was a beautiful Monday morning at Forest Hill Cemetery in Madison where history was remembered, and honored, on Memorial Day. 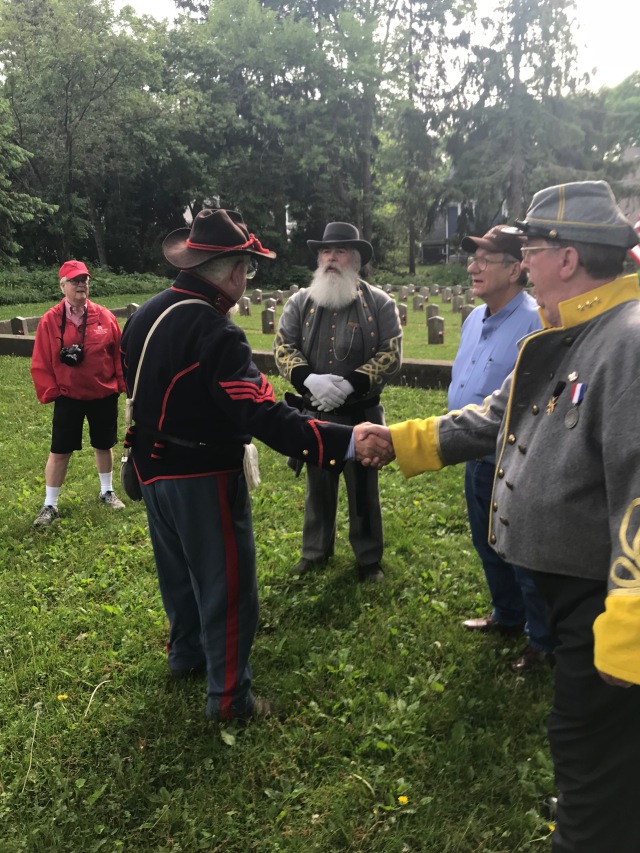 North greets South on Memorial Day in Madison WI; Representing the South at right are L-R Chris Morgan of Tennessee (originally, Green Bay), Bob Allen of Racine County (originally Texas), and Dan Bradford of Sun Prairie whose ancestors fought on both sides of the Civil War. That’s Confederate Rest in the background.

The most touching moment was when a Union re-enactor from the Civil War strode south from Union Rest, where memorial ceremonies conducted on the 150th anniversary of Decoration Day (now Memorial Day) had just concluded, past the imposing mausoleum structure to Confederate Rest. There, he shook hands with three Confederate re-enactors as they began their remembrance. (Pictured above.)

After appropriate speeches, Union and Revolutionary War re-enactors fired a volley over the besieged Confederates Rest cemetery followed by another volley, on the other side, from white-shirted Legionnaires and the playing of “Taps” to close the ceremony.

We saw no elected Madison official — no mayor, no alder (certainly not Ald. Matt Phair, who knows more history than the rest of the world combined). For they have voted to banish the first permanent marker naming the 140 dead and honoring the Madison woman who cared for those graves. At first, she did so alone; soon, she was joined by her fellow Madisonians, including two governors in their turn: first, Gen. Lucius Fairchild, who lost an arm at Gettysburg, then by Gen. Cadwallader Washburn, who served under Grant at Vicksburg and many other Madisonians.

Monday in Madison, a 70-year-old Air Force veteran of the Vietnam era, Al Zeuner of Oregon, stood unsteadily in front of the memorial stone to Alice Whiting Waterman who tended the graves of the 140 Confederate POWs buried there. The purpose of this Memorial Day (we are condensing) was to “Honor Americans, all Americans. The Civil War was a mistake. No politician can change what happened. We are very grateful of you people for being here in honor of our fallen. … I served my country, I’ve got the medals to prove it. … We are not a bunch of hot heads.”

Of the 140 southern POWs buried at Confederate Rest, Bradford said:

“They came here not of their own volition, but as prisoners of war. The people of this city came to see them at the train depot; they did not see the great horned devils they thought they would see but wounded and sick men. Shocked to see their condition. The people here, seeing this, brought clothing, blankets, and medicine to take care of them. I’d like to know what happened between then and now because of a particular individual in the city — we have a mayor now who speaks out of ignorance; who does not know the history. … [the southern dead] been declared to be American soldiers, American veterans, by Congress and before that, by President Lincoln.”

I hope the following video clips portray a sense of the commonality of loss and remembrance on display at Union Rest and Confederate Rest in Madison WI on 05-31-18.

Ann of Althouse has an account with photographs from the Venerable Meade.